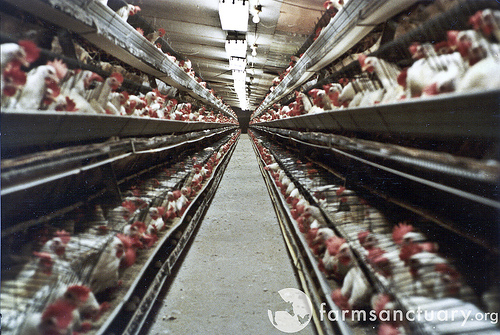 People don’t like animal cruelty. And they sure don’t want to eat meat that comes from animals that have been subjected to inhumane and abusive treatment.

In Iowa, they’ve found a way to solve that problem: criminalize folks who expose cruel and inhumane animal treatment. Last week the state House of Representatives passed HF 589 (pdf), and it’s poised to pass the State Senate (as SF 431) as well.

The bill, which passed 65 to 27, would make it a felony to secretly record factory farming practices. Shoot a photo of a cow, go to jail – for years.

You heard that right.

Under the bill, anyone guilty of  “animal facility interference,” any person who produces, possesses or distributes an audio or visual recording of an animal facility without the consent of the owner is guilty of either a class D felony or aggravated misdemeanor. So not only would taking the photo at the top of this page land you in jail, but by publishing it we’re accomplices who could be punished by jail time.

Representative Annette Sweeney, a lead sponsor, says there’s no need for exposés because employees at these farmssign a code of conduct.

“Whenever you’re hired in an egg facility, a hog facility, you go in and you sign a code of conduct,” she says. “You say if you see anybody abusing animals, you’re going to tell your employer that that person is doing that — and you are bound by that code of conduct.”

Ah, how simple life would be…

The Iowa House is dominated by Republicans, the Senate by Democrats (just like in Washington, DC), so there’s still a chance the measure won’t pass. And if it does, the measure is blatantly unconstitutional gag on protected speech, that will probably never survive a court challenge.

Dan Hauff, investigations director for Chicago-based Mercy for Animals, said the law is likely unconstitutional under the First Amendment. He said it would inhibit investigative journalists from reporting on animal cruelty, environmental hazards and food safety issues on farms. He said the organization might bring litigation if the bill becomes law, but he hoped it wouldn’t make it that far.

The executive director of the Reporters Committee for Freedom of the Press,  Lucy Dalglish, called the Florida bill “flat-out unconstitutional, not to mention stupid.”

Those videos were coming thick and fast in recent years. If you’ve got the stomach for it, check out these graphic undercover exposés from Mercy for Animals, shining an unwelcome (and very disturbing) light on Willet Dairy in New York and Conklin Dairy Farms in Ohio. If you could eat anything produced there after watching those videos, you’ve got a stronger stomach than we do.

This makes big ag unhappy. There’s no point being cruel and inhumane if there’s no profit in it. And as Martin Matheny notes at Change.org, “When we learn how it’s made, we suddenly tend to buy less meat.”

The study concludes that meat producers would be “Well served by collaborating in recognizing
and responding to changing societal pressures regarding animal well-being”.

It appears that rather than responding by cleaning up their act, big ag is instead acting like a Scooby-Doo villain, concluding that “We would have gotten away with it, too, if it weren’t for you danged kids.”

-> Next page: The disease is spreading