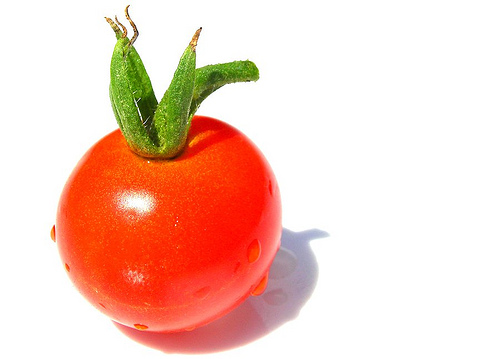 Last week, we talked a little bit about General Mills’ Muir Glen tomatoes ditching the BPA in their cans. It was a little bit unclear as to when these new cans would be available and how to tell which tomatoes were in the new BPA-free cans.

I contacted Muir Glen but hadn’t heard back from the company at the time of publishing. They responded to my email yesterday. Here is my query and the company’s response:

I read in your CSR report that you’re phasing out BPA in your Muir Glen tomatoes with the next harvest, and I was wondering how I’ll be able to tell which cans are BPA free? Any ETA on when those will hit the shelves? I would really appreciate a response.

The response they sent back feels very much like a form letter:

Thank you for contacting Muir Glen about bisphenol-A or BPA.

Bisphenol-A is a component of protective coatings in metal food packaging, and provides an important food safety and quality function in canned foods. Scientific and governmental bodies worldwide have examined the science many times and have concluded that the weight of evidence supports the safety of BPA, including recent comprehensive assessments in Japan and in the European Union.

In January 2010, the U.S. Food and Drug Administration announced another review of BPA. This review in expected to take 18-24 months, and Health Canada and the World Health Organization (WHO) will participate.

Most metal cans in the food industry utilize BPA in the can lining or can lid. Some of our products do, and many competitors’ products do as well.

Muir Glen continues to believe BPA is safe. However, we know that some of our consumers have wanted us to pursue alternatives. We have been working with our can suppliers and can manufacturers to develop and test alternative linings that do not use BPA for some time.

One alternative has proven safe and viable in our processing of tomatoes – and Muir Glen will transition to can linings that do not use BPA on our organic tomato products with the next tomato harvest. It is an approved non-epoxy alternative. Can coatings used by Muir Glen also comply fully with all applicable U.S. Food and Drug Administration requirements for safe use in food contact applications.

Unfortunately, we don’t have a date as to when these cans will be released and they will not be labeled as BPA-free.

In short, it sounds like there’s no way to tell which Muir Glen tomatoes are BPA free, and those new cans aren’t on the shelves yet. It was disappointing to hear that the company isn’t planning to add some sort of labeling letting us know which cans are safe. For now, it seems like the best options are sticking to fresh tomatoes, using boxed tomatoes instead of canned when fresh aren’t available, or canning your own. Over on Facebook, Deborah Keith Geoffrion points out that “Edens cans are BPA free & more organics are following.”