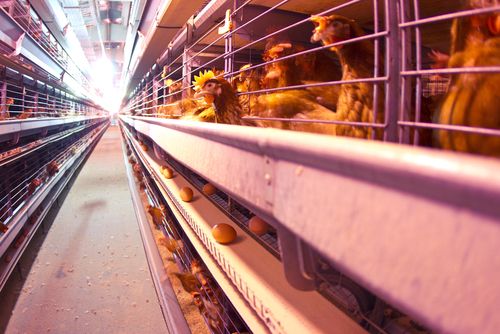 Representative Steve King of Iowa introduced an amendment to the House version of the Farm Bill which would nullify California’s humane egg production law and the more recent foie gras bill.

Amendment 45 uses the Commerce Clause to deny states the right to regulate agriculture production and sales within their own borders.

The Commerce Clause (Article I, Section 8, Clause 3 of the United States Constitution) reserves the power “to regulate Commerce … among the several States …” to Congress. Rep. King argues that this means any agricultural product produced in any state can be sold in any state, even if it does not meet minimum standards set by the citizens of a state.

When California enacted a humane egg production law a few years ago, egg producers in the state argued that it would put them at a disadvantage to egg producers who did not have to meet minimum standards in the care of their hens. The California legislature included in the law a stipulation that eggs produced in other states must also meet minimum standards for the care of the hens before they could be sold in California.  The standards had been pushed forward by the United Egg Producers, an industry group which supplies about 95% of the eggs in the United States, and the Humane Society of the United States.

Rep. King’s press release about the amendment says the amendment “…prohibits states from enacting laws that place onerous conditions on the means of production for agricultural goods that are sold within its own borders but are produced in other states.” Allowing hens the room to stretch their wings is considered “onerous” in some circles, but thankfully not all.

Rep. King’s district is in Iowa. The egg farm that had to recall a half billion eggs in 2010 after several hundred Americans fell ill from salmonella is also in Iowa. The humane egg production standards are intended to reduce the likelihood that overcrowded conditions in henhouses will result in another disease outbreak.

If the Farm Bill is passed with this amendment attached, the only way to require humane living conditions for animals would be through federal law.

Let your Senators and Representative know what you think of this amendment.

The Egg Products Inspection Act Amendments of 2012 would provide minimum standards for the care of egg-laying hens. It includes much of the same standards for egg production that the California law has. In the House, the bill is H.R. 3798. In the Senate, it is S. 3239. Let your Senators and Representative know what you think of those bills.