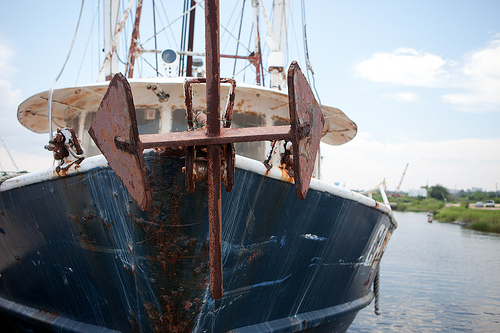 Scientists studying the effects of the BP oil spill tell a different story. There are a number of researchers looking at how the spill is affecting the “food web,” an updated term for the food chain.

According to research coming out of the region, the spill has serious implications for our food supply because the oil and dispersants are affecting organisms at the bottom of the food chain. Dispersants like the highly toxic Corexit break up the oil into smaller pieces that are perfect for feeding oil-loving bacteria. The idea here is that the lower on the food chain you go, the more damage you’re doing, since those organisms contaminate their predators, which contaminates the predators’ predators and so on.

These contaminated organisms don’t stay in one place. Scientists are finding oil droplets on crabs, for example, which feed many marine species in the area. These creatures show up on shore in places not directly impacted by the spill. Last month, VOA reported that Louisiana’s rice paddies, the leading producers of rice in the US, weren’t affected by the spill since they rely on fresh water, not salt water. However, with the spread of oil since then and this new evidence about contaminated organisms spreading oil much further, there’s no telling what the long term impacts on these fragile wetlands will be.

Not only is there a web of contamination, but the increased oil and natural gas gushing into the Gulf is blocking sunlight and dramatically reducing oxygen concentration.

For a broader look at how the BP oil spill is effecting the Gulf’s ecosystem, and by extension our food web, check out this TED talk by Carl Safina on the spill’s unseen culprits and victims:

All of this means that the BP spill is going to have an even more profound effect on our food than the closed fisheries that are devastating the economies in Gulf states. The bigger impact we’re looking at is a permanently altered ecosystem in the Gulf that is going to effect our food supply for years to come.