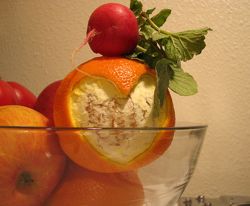 A new study of dietary patterns in 52 countries reveals that a typical Western diet of fried foods, salty snacks, and meat increases the risk for heart attacks by 35%.

You can lower that risk by changing your diet.

The INTERHEART study analyzed almost 6,000 heart attack cases and compared them to over 10,000 control cases (without known heart disease). It included 16,000 participants living in 52 countries around the world, confirming that “the same relationships that are observed in Western countries exist in different regions of the world.” (Salim Yusuf, D.Phil., the study’s senior author)

“A simple dietary score, which included both good and bad foods with the higher score indicating a worse diet, showed that 30 percent of the risk of heart disease in a population could be related to poor diet.” – Romania Iqbal, Ph.D., lead author

Break out the veggies, gorge on fruit, and lower your risk of heart disease by 30%.

Now that’s affordable healthcare for everyone!