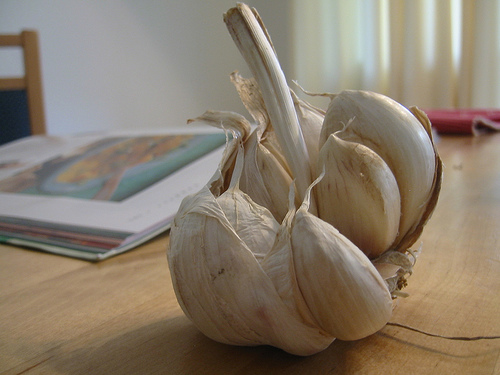 Garlic is good. So good. And yet it can be bad…really bad, unless you want to ward of vampires.

It has been all but banned in our house because the after effects of garlic are unbearable. The garlic fingers, the shower curtain that mysteriously absorbs garlic smell, the breath…and that’s just the start of it. Eat enough, and it will ooze out of your pores.

I started looking on the internet for ways to avoid the garlic smell. Let’s just say, none of it is very scientific, but it’s worth a shot…

How to get rid of garlic smell on skin?

Some people swear that stainless steel is the answer. I’ve never tried it, but I will the next time I chop garlic. Apparently all you need is a stainless steel utensil to rub against your hand and the smell will go away. You may have seen stainless steel bars for sale in store claiming to do this. They are theorized to work by binding the the sulfur compounds in the garlic to the stainless steel. However, an NPR article interviewing a chemist is a bit skeptical.

I can vouch that soap and water is not enough, but some people have said that baking soda rubbed on the hands works, as does putting your hands in coffee grounds.

How to get rid of garlic breath

If you really don’t want to smell like garlic, the best advice is sadly…don’t eat it. There are sulfur compounds in garlic that are absorbed into the body, then released through the skin as a gas. So just washing with soap is not enough. It will come back until the gas is gone.

Some foods are said to reduce the gas’ effect. Milk is apparently great for this, but basil (which goes a lot better with garlic than milk), raw mushrooms and water may also help.

Parsley may temporarily mask garlic breath, and is often included in recipes like garlic bread for this purpose. It’s only temporary and will come back.

I usually go with gum and hope that the people I ate dinner with also ate garlic.

How to get rid of garlic smells in the house?

While I’m not sure my shower curtain problem is avoidable (my theory is that it acts like a giant air filter, trapping garlic scent in it), there are some tricks floating around for getting rid of that ‘I just cooked with a boatload of garlic’ smell out of your house.

Bowls of vinegar and baking soda left in the kitchen seem to be the most popular ones. As does just covering it up with essential oils or simmering lemon juice on the stovetop.

The one I found must amusing though was to just cook with more garlic. After a while, you won’t notice the smell any longer, and neither will anyone else, because they’ll stay far, far away :)

What are your tricks?