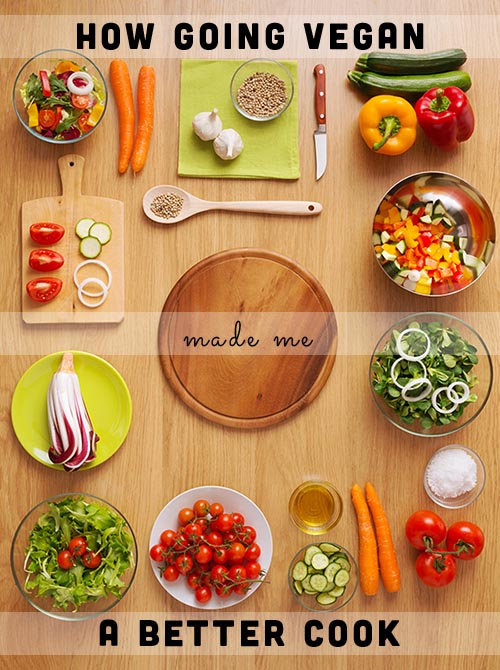 It might seem odd, but once I stopped eating meat and dairy I became an even better cook. I had always liked cooking and making meals for my friends and family, but I was a slave to the recipe. I had to follow everything exactly or I thought the entire dish would be ruined.

I wasn’t until I changed the way I ate that I started to realize that many recipes were more like guidelines instead of the law. Now, I will tell you that there are some recipes that you just can’t mess with and expect the exact same outcome. Usually, baking recipes are more of a science than a suggestion. But that doesn’t mean you can’t play with them a little and see what happens.

The more and more I couldn’t follow along with traditional recipes, I started to branch out and get a little more creative in the kitchen. And I have to say I think the food that I am making now is so much better and tastier than before! Here are a few ways that being vegan made me a better cook:

I had to try new ingredients.

I could no longer rely on regular standbys like butter, milk, cheese, chicken, or fish.  This made me try different things like tempeh, coconut oil, cashew cream, and almond cheese.  It also made me realize that I didn’t need those things to make a healthy or tasty meal.  There are plenty of options when you go vegan.

I had to read labels.

The day’s of just throwing anything into my shopping cart without a care are over.  Now I make sure to read the ingredient list of any and everything because you don’t know what might be lurking in seemingly simple food.  This also made me aware of how much junk is in processed food in general.  I was a little horrified at all the stuff I had been putting into my body over the years just because I didn’t read the label.

This one kind of goes along with the last point.  I decided I wanted to rely less on packaged food and more on fresh food.  There is a whole world of produce, legumes, and grains that make really delicious meals.  They are also so much better for you than a package of food, even if that food is vegan.  Just because you’re vegan doesn’t mean that you’re healthy.  If you rely mostly on processed vegan food, you aren’t doing much for your wellbeing.  Focusing on fresh food has made my meals, and my health, so much better.

The Standard American Diet relies heavily on meat and other animal products, so when I was first looking for recipes to try I turned to other cultures.  I tried so many different cuisines from India to Ethiopia and found that there are so many amazing meals out there that are all plant-based.  I also learned about the history and culture behind these meals and really started to get interested in how the rest of the world eats.  The food we eat can say so much about our background and traditions and it’s fun to learn about other cultures.

I got creative and created my own recipes.

There are a ton of great vegan recipes out there, but I eventually just started making up my own meals.  Some were great and some flopped, but it gave me the confidence to not worry about messing up a meal.  I really began to understand how different ingredients and flavors went together and that made my cooking really take off.

Becoming vegan in no way means that you are giving up delicious food.  It doesn’t mean that you are going to be stuck eating plain tofu and give up entirely on making tasty meals.  It is a chance to really try new things and branch out into new territory.  I bet that if you give it a chance, being vegan will make you an even better cook than you are right now!

Katie Dawson is a blogger over at Life Healthfully Lived and is passionate about helping others find their way to their healthiest life possible. She is a certified sports nutritionist, a writer for Invironments Magazine, and is working on becoming certified in plant-based nutrition. She lives in Chicago with her husband and two cats and loves to run, throw kettlebells around, and do yoga.