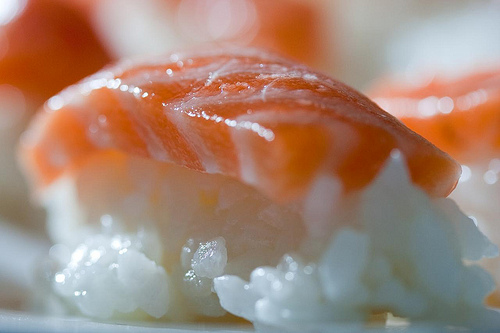 Wild salmon populations are dwindling from over fishing, and consumers’ taste for the fish is far outpacing the salmon’s ability to reproduce. It takes about 3 years for these fish to reach maturity, meaning that natural populations take years to replenish.

Massachusetts-based AquaBounty is has developed a genetically modified salmon that matures in 18 months, and they’re working on FDA approval to get these fish onto supermarket shelves.

The company claims that the fish, called AquAdvantage, will be sterile. They say that means it poses no risk to the wild, but Chris Kaplan’s article over at Reality Sandwich points out that:

Unfortunately, there are risks that accompany genetic manipulation. According to Lord Melchett, policy director at the Soil Association, once an animal’s genes is introduced to those from another animal the “DNA becomes unstable, and there is no guarantee that these fish would remain sterile,” which poses a huge risk to wild salmon, and could have devastating effects.

However, even if you set aside concerns about genetically modified organisms in the food supply, the potential negative environmental impact of these AquAdvantage salmon is huge.

The Pitfalls of Farmed Salmon

The idea behind this GM salmon is to conserve the wild salmon population by relying more on farmed fish. However, farmed salmon has problems all its own. Farming operations often rely heavily on “vaccines, antibiotics and pesticides to control disease and parasites that are often exacerbated by the high densities required to make industrial livestock operations profitable.”

Production systems for salmon farming often use open net-cages that are right in the ocean, which means all of those chemicals, along with the concentrated amounts of waste from the fish go right back into the eco-system.

FDA is considering this salmon right now, so it could be on grocery store shelves as soon as a year. What’s more, because we aren’t required to label genetically modified food in the U.S., chances are you won’t even know when you’re buying GM salmon. If this does get approved, the only sure way to avoid consuming AquAdvantage would be to avoid any farmed salmon.

Becky Striepe is a green blogger and independent crafter with a passion for vintage fabrics. She runs a crafty business, Glue and Glitter, where her mission is to use existing materials in products that help folks reduce their impact without sacrificing style! She specializes in aprons and custom tote bags.