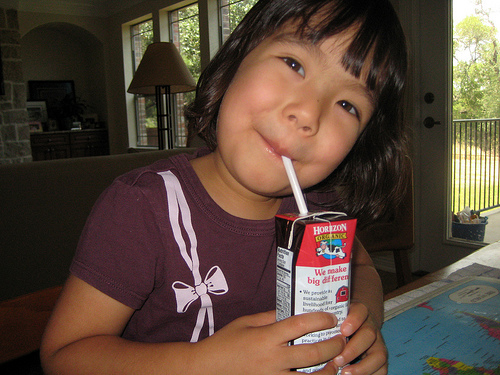 Horizon Organic is part of WhiteWave, which is a division of Dean Foods (since 2009). It is the largest organic milk bottler and the largest dairy conglomerate in the United States. The Cornucopia Institute filed a formal request with the Federal Trade Commission (FTC) last week “asking for an investigation into Dean Foods’ advertisements for its Horizon milk with Omega-3 DHA.” The Cornucopia Institute believes that the nutritional benefits of Horizon Organic Milk Plus DHA Omega-3 are being overstated.

Horizon Media (not actually part of Horizon Organic) recently launched a nationwide marketing campaign on behalf of Horizon Organic that claims that this milk benefits the brain development of children due to the inclusion of Dean Foods’ proprietary DHA oil processed from fermented algae.

The Cornucopia Institute asserts that this claim is “not based on credible scientific evidence, and are therefore misleading consumers.”

“DHA is one of many naturally occurring omega-3 fatty acids, which scientists believe is beneficial when consumed through real, wholesome foods such as fish, flax seeds, nuts or grass fed milk and meat. But the DHA in Horizon’s milk comes from a highly processed oil, extracted from fermented algae,” says Charlotte Vallaeys, Director of Farm and Food Policy at The Cornucopia Institute. “There is little scientific evidence to support the claim that adding these manufactured oils to foods is in any way beneficial to children’s cognitive development.”

Beyond the unsubstantiated brain development claim, The Cornucopia Institute has even challenged that this milk is not organic.

The algal oil is manufactured and marketed by Martek Biosciences Corporation, based in Maryland. The Cornucopia Institute has charged that food processors adding Martek’s algal oils to organic foods are in violation of the Organic Food Production Act and USDA organic standards, which prohibit unapproved non-organically produced ingredients in organic foods.

Seriously — do these algal oils sound organic to you?

How did they get let into organic foods? Through the administrator of the USDA’s National Organic Program during the Bush administration.

She was contacted by a “corporate lobbyist who asked her to reinterpret the federal rules governing organic foods.” The new director of the National Organic Program, the regulator of on-the-market U.S. organic foods, publicly stated that Martek’s oils and other like them should not have been allowed to be included in organic foods and that the administrator incorrectly interpreted the federal organic standards.

The Washington Post reported on this story in 2009 in more detail.

Now, my initial concern about writing such a piece was that people may grow too skeptical of organic milk, in general, from such news. The fact of the matter is, though, most organic milk brands supply milk from “ethical family-scale farmers” and do not contain any potentially funky additives.

“These highly processed, novel ingredients do not belong in organic foods, and it is important to remember that very few processors are adding them,” Mark Kastel, Senior Farm Policy Analyst with Cornucopia, states.

The FTC has conducted inquiries into unsubstantiated claims related to DHA-fortified foods in the past, and with no scientific evidence supporting the products’ claims, the advertising materials were changed.The FTC has already sent 12 warning letters to companies making similar claims now based on their products’ inclusion of DHA algal oils.

The only scientific studies of Martek’s DHA oils (performed by Martek) have found no benefits like those they claim.

In Europe, “a petition to allow a health claim related to DHA supplementation in milk for babies and toddlers and brain development” was rejected by the European Food Safety Authority in 2009 due to “insufficient” scientific evidence of such claims.

It seems Horizon and Dean Foods had better change their marketing plan and not mislead customers in an attempt to take more of the organic market away from small-scale organic milk providers and more “organically-minded” brands.

Read more about this story and relevant parties on The Cornucopia Institute’s website.

You can also check out its long, extensive scorecard of organic dairy brands. (Horizon/Dean Foods’ falls under the last ranking, “0” or “Ethically Deficient.”)