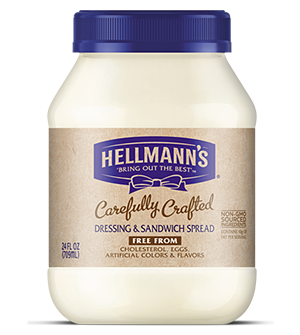 After unsuccessfully trying to sue Just Mayo to get the company’s eggless mayonnaise off of shelves, Hellman’s is now coming out with an eggless mayonnaise. In an interview with the Associated Press, Unilever’s marketing director said it wasn’t a response to the Just Mayo debacle, it was simply giving consumers what they want.

Regardless of why Hellman’s says that it’s launching its new “Carefully Crafted Dressing and Sandwich Spread,” this is great news for chickens everywhere! A large company like Unilever shifting even some of its production to an egg-free alternative shows that our food system is changing.

Last fall, Unilever, Hellman’s parent company, sued Just Mayo, claiming that you can’t call something mayonnaise if it doesn’t contain eggs. The company ended up ditching the lawsuit after thousands of consumers called them out for their bullying tactics. In the wake of the suit, they seem to have decided that if you can’t beat ’em, join ’em.

Just Mayo, Vegenaise, and other vegan mayo companies are proving every day that you don’t need animal ingredients to make a sandwich delicious. Whether you call it “mayo” or “spread,” it’s all about taste and texture, not about eggs.

Hellman’s eggless mayo is free of eggs, artificial colors and flavors and made with non-GMO ingredients. As a long-time Vegenaise devotee, I’m not sure whether I’m going to branch out in my vegan mayo adventures, but I’m glad that such a mainstream brand is offering an eggless option. Many mainstream shoppers trust the Hellman’s brand, and this new spread offers a soft landing for folks who have been considering eggless mayo but were hesitant to branch out.