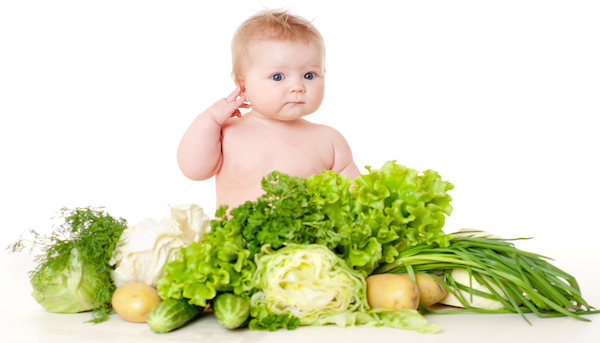 How a tragedy helped my daughter develop healthy eating habits early on.

When it was discovered at my daughter’s 3-month check-up that she was losing weight because I actually had a very low breast milk supply, I was about as devastated as I’d ever been in my life. “You have to add formula,” the doctor insisted. I refused. We hired multiple lactation consultants and tried everything to get my body to make more milk. I was taking so much fenugreek that it sent my hormones into batshit crazy mode. I couldn’t sleep. I was feverish and sweating constantly. Crying all the time. And after six weeks of herbs, breast compressions, round the clock feeding and pumping, it still didn’t give me the boost I needed to properly feed my daughter. Already back at work (home-based), I was completely overwhelmed.

The devastation got worse. We kept trying to get my daughter to take a bottle of formula, but she refused and latched on tighter to me in what seemed like hopes that she could remedy the situation herself. When her net weight gain at age 4 months was a mere four more ounces more than it had been at month two, my doctor said we could no longer keep relying on my breast milk to feed her. If we didn’t want to add formula (or couldn’t), we could try adding solid food. But we had to do something.

I cringed at that suggestion as well. Imogene could barely sit up. How was she ready for solid food? But aside from chasing down other women’s breast milk that was as clean and healthy as mine, this was really our only choice. So with help from our lactation consultant, we introduced Imogene to avocado. The response was electrifying. In her nonverbal adorable baby way, I swear she looked right at me as she took her first bite and said: “What took you so long! I love this stuff!”

While we eventually succeeded at adding formula (and are still breastfeeding at 13 months!), food quickly became a core part of Imogene’s diet. And her healthy eating habits get complimented all the time.

After avocado we added butternut squash. We added other vegetables like sweet potatoes, carrots, zucchini, chard, cauliflower. She eats whole grain oats, rice and quinoa. She loves all types of beans, lentils, tofu.

When I talk with other mothers about their children’s eating habits, it’s often accompanied by a slight smile—a grin of embarrassment with a twinge of regret. They ask me what my daughter loves to eat and their jaws drop when I say Brussels sprouts, cabbage and chard are among her favorites. “Really?” they ask, “Brussels sprouts?”

Yes. She absolutely loves them.

I keep hearing that eventually kids will refuse to eat. And sometimes when Imogene has had enough, she’ll toss a bit of food onto the floor, but it’s not often that there’s any left for her to throw. She simply loves to eat healthy foods. For her birthday, I broke down and baked a carrot cake (vegan, low sugar), and was pleasantly surprised when she didn’t want to eat it at all but picked up a tree of cauliflower from her tray instead and shoved it into her mouth.

Children love bright colors and interesting shapes. Why would that not apply to foods? As with anything, sometimes the first try is met with a funny face, but that’s not an indicator of dislike. I’ve seen her scrunch her nose up at the first two bites of a new food and then quickly gobble it all up. After the “what is this stuff?” fades, it’s followed by requests for more.

Spices are bright flavors that kids get excited about exploring too. We’ve started adding lots of seasoning to her foods now: cinnamon and cloves in oatmeal, turmeric on chickpeas and cabbage, cumin in her pinto beans and chard. Just like toys and books need to be varied, so does a child’s diet. The more we offer, the more she likes (we’re still working on raspberries). And it seems that even if she doesn’t like something, she appreciates that we at least offered and gave her the benefit of the doubt. She likes knowing she has choices, even if some of them don’t pass muster.

We don’t play games with her food. There’s no helicopter or choo-choo train delivering a bite of spinach and lentils. We don’t use kid’s plates or spoons. Imogene eats like a big girl at the table with her parents, and now that she’s over a year, often bites of her parents’ food, even if it’s a tad bit peppery. She uses her hands when she can and has even started to try to scoop food onto the spoon herself. She likes to mix bites of food together, I assume, because the flavors compliment each other better that way.

I don’t think it was starting her early that turned Imogene toward healthy eating. I think it was starting her early that made me an even more conscientious feeder. Even though we’re already healthy–we’re a plant-based family with a love for fresh and minimally processed foods (and I’ve been a food writer for a decade), there were moments when I worried that she wouldn’t want to eat healthy foods because that’s just what babies do. Or so I’ve been told. I remember my own picky diet habits as a kid and it was (much to my horror now) Kraft macaroni and cheese and bologna and mustard sandwiches or sugary cereals. I often joke that I’m a vegetarian now because for the first ten years of my life I refused to eat vegetables. Making up for lost time, I guess.

But it’s what we feed our kids that will determine what they eat. Imogene doesn’t want cake or cookies instead of kale because she doesn’t get offered them. We have never offered snacks as an option, so she’s not being filled up on Cheerios before a meal. And at her last weigh-in, she was back up to the 75th-90th percentile–right where she was at birth, before we discovered I didn’t make much milk.

Of course, as with anything I’ve learned in this parenting game, things can change in a second. Sometimes, of course, that’s a blessing. But I knock on wood every day that Imogene still cleans her plate with a smile…and as long as there are Brussels sprouts on it, I have a good feeling she will continue to.