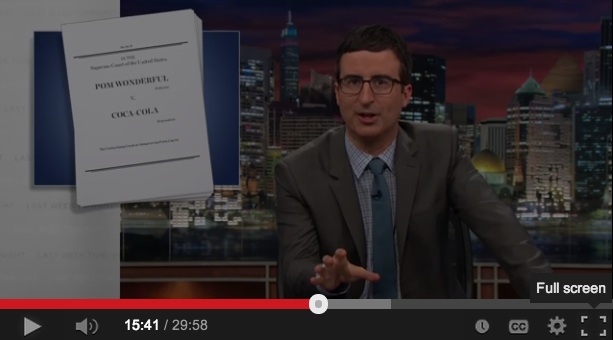 HBO’s new show, Last Week Tonight with John Oliver, had a funny and spot-on take on the POM vs. Coca-Cola Supreme Court Case, misleading food marketing claims and how to get even.

Starting at 15 minutes and 30 seconds into the show (if you’d like to go directly to the clip on YouTube), the 5 minute segment hits all the salient points about false and misleading advertising, government ineptitude and the shams that we all are subjected to at the hands of large food companies who want to exploit consumer desire for healthier food.

After a brief introduction, Oliver shows a news clip from Justin Gray, Channel 2 in Washington, DC, who holds up a bottle of Minute Maid Pomegranate Blueberry Juice and says: It says Pomegranate Blueberry in big letters on the label but this juice is actually 99% apple and grape. To see how much pomegranate juice is actually in this Minute Maid, you need something as small as an eyedropper. [Gray takes one dropper full of juice and squeezes it into a measuring cup.) That’s it.

Oliver then points out that POM, as I’ve noted previously, should be ashamed to be casting dispersions at Coca-Cola.

JO: … The US government will let you say just about anything about your products, but promising immortality was too much even for them.

JO: Which means, what this case is really about is POM Wonderful saying: “Hey, we didn’t spend years misleading people about the health benefits of our snake oil for you to come in and lie about how much snake oil you have in your products.”

Oliver goes on to comment on false and misleading labeling for a variety  of products such as Hellman’s Mayonnaise and Kellogg’s Frosted Mini Wheats.  All these insights are also priceless.

JO: Its extremely rare for companies to be called to account for any of this… clearly we are now at a point where food companies feel no obligation to accurately represent what is in their products and what they do for you.

Oliver and the folks at HBO end the segment by directing viewers to the Last Week Tonight facebook page. There you will find fake nutrition labels and some advice:

Print them out and tape them to food items you have at home. But please do NOT use them for hilarious acts of public vandalism. And if you do that, ABSOLUTELY DO NOT tweet them to us at @LastWeekTonight. That would be a crime. A very funny crime.