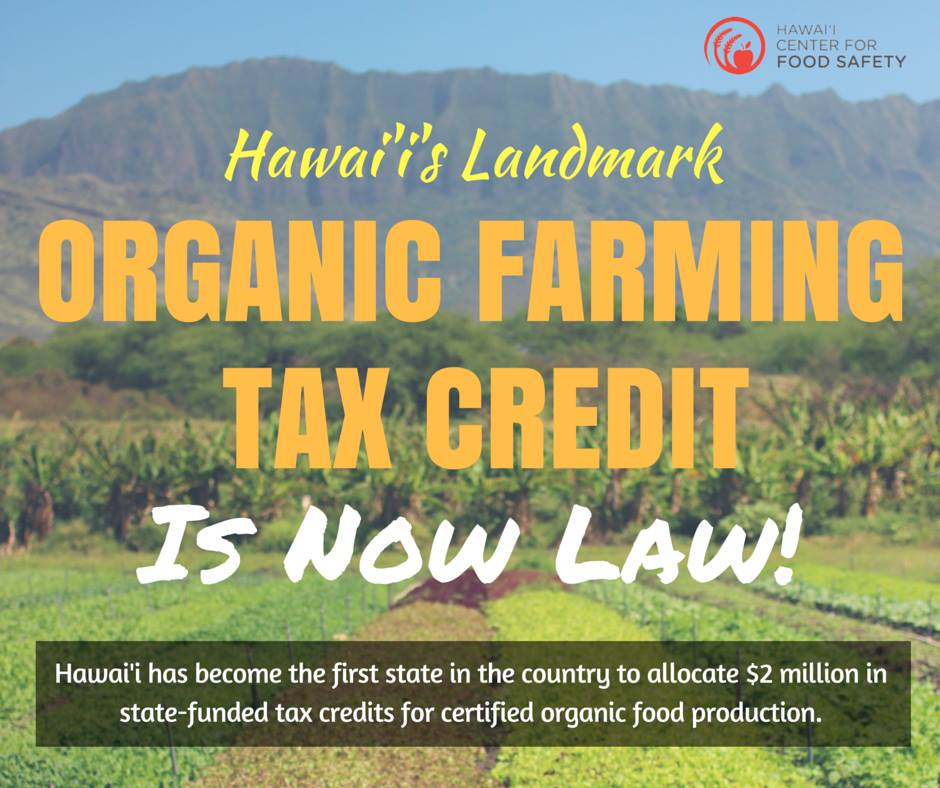 Today was a landmark victory for organic farmers in the state of Hawaii. We first wrote about this Hawaii tax credit in May 2016, and today we have even better news to share because it is now a first-of-its-kind law!

This unique Hawaii tax credit will help organic farmers offset the costs associated with growing organically, which are often higher than ‘conventional’ or chemical-intensive farming, primarily due to the required organic certification.

Governor Ige did not veto the bill, and has thus made Hawaii the first state to pass such legislation. The bill will allocate $2 million in state-funded tax credit for certified organic food production, which will complement existing federal programs. This is a win for us all, as it shows that legislators are willing to help support sustainable food production. This is extra important in the island state of Hawaii where so much is imported– and thus more expensive.

In the Hawaii Center for Food Safety press release, Director Ashley Lukens says, “Government has a critical role to play in building a local sustainable food system. Hawai‘i cannot meet the goal of doubling local food production without support. By providing financial incentives for organic certification, the state is putting its money where its mouth is.”

Chris Lee, the Representative who introduced the bill, says, “If we want a new generation of farmers to start growing food and jobs for us, we need to give them the tools and support to do it.”

The Center for Food Safety estimates that organic farming is worth about $6million to the state. Since many organic farmers are working small plots of land, this legislation truly helps ‘the little guy.’ Many farms in Hawaii are just one or two acres, and there are very few large operations, organic or otherwise (unless we’re talking about those huge GMO test fields– but that’s not really food, is it?).

A credit like this can really make a difference to these smaller operations to help cover the cost of certification and inputs, hopefully giving local farmers a competitive advantage over produce brought in from the mainland, where farms can be larger and more automated to reduce costs.

What can this Hawaii tax credit for organic farmers help with?

So cheers, to Governor Ige, Representative Chris Lee, and all the other legislators who helped make this bill into a law and for letting Hawaii take the lead on this important industry.

Related: Hemp on Maui Could Be a Gamechanger for Residents