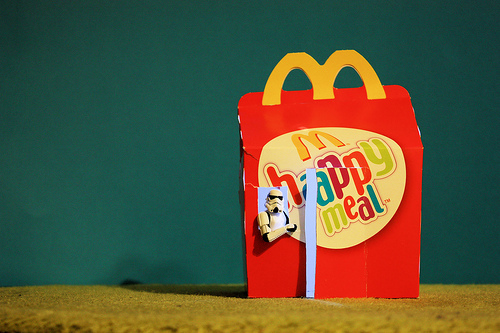 As you’ve probably heard, San Francisco is seriously considering banning toys from unhealthy fast food meals (most notably, McDonald’s Happy Meals). There is reportedly a lot of support for the Happy Meal ban in San Francisco, but as you can imagine, McDonald’s isn’t going down without a fight and the decision is anything but final.

Markie McBrayer of Corporate Accountability International wrote in an email to me a few weeks ago:

This ordinance has struck a deep nerve with the industry — a clear indication of the primacy of predatory marketing to its business model. McDonald’s and the fast food industry have launched an all out PR offensive to influence the political process.

Where McDonald’s usually hides behind its trade association to avoid tarnishing its public image, it has come out from behind the curtain to oppose the policy. It has taken out a full-page ad in the San Francisco Chronicle, flown top executives in for a series of behind closed doors meetings aimed at getting Supervisor Mar to compromise or pull the policy, and threatened a lawsuit if all else fails.

Well, the fight continues on. The most recent news on this is that McDonald’s VP of Nutrition and Menu Strategy, Karen Wells, wrote a piece in the San Francisco Examiner last week opposing the ban and claiming that Happy Meals are not as bad as most people make them out to be.

One notable claim put forth by Wells is that: “Any objective look at our menu makes clear that our Happy Meals are frequently more balanced than either school lunches or meals served at home.”

I hope to goodness that is not true, and would have a hard time thinking of people I know who serve food less balanced than Happy Meals at home, but maybe I am naïve and don’t know what the common American actually eats (when they aren’t eating McDonald’s).

Another line from Wells’ piece that immediately grabbed my attention was this one: “No scientific evidence exists to demonstrate that limiting access to toys will address or solve the stated purpose of the ordinance — decreasing childhood obesity.” And how does Wells think such information could be obtained?…

I think the best way to come up with that evidence would be a good case study. If San Francisco is interested in doing one, why don’t we let it?