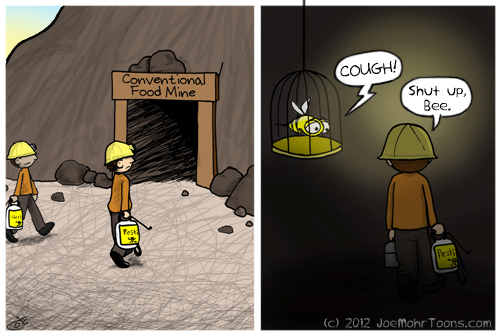 More on the declining health of bees: Have Bees Become Canaries In the Coal Mine? Why Massive Bee Dieoffs May Be a Warning About Our Own Health (AlterNet)
From the article:

One class of pesticides, neonicotinoids in particular has received a lot of attention for harming bees. In late 2010, the EPA came under fire from beekeepers and pesticide watchdog organizations. This happened when Colorado beekeeper Tom Theobald spoke out about how the EPA allowed clothianidin to be used without any proof it was safe and despite the fact that the EPA’s own scientists believed it “has the potential for toxic risk to honey bees, as well as other pollinators.”