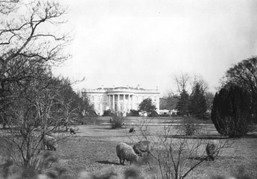 Pretend you hold the magic fairy wand of political change: What would you want the next president to do on the first day of his or her administration to tangibly address the planet’s most pressing challenges?

For me, I’m voting with my friend Roger Doiron and his campaign to get the next president to turn a chunk of the White House lawn into a kitchen garden. Roger contributed this idea (and currently leads the vote tally) to the On Day One project, a web platform of the Better World Fund to collect and share ideas about a to-do list for the President’s first day on the job.

Such a Presidential act would take the burgeoning local food movement to new levels of awareness and interest, and make an important global statement that America is taking self-reliant responsibility for our planet’s future. With a pack of zucchini seeds, the White House can send a message that the individual act of growing some of our own food can, collectively, combat and wrestle the looming weight of peak oil and global warming much more positively than further fertilizing the obese defense budget.

Interestingly, Roger’s crusade for the kitchen garden at 1600 Pennsylvania Avenue roots in historic precedent. A local food advocate and founder of Kitchen Gardeners International, a global non-profit network of 4,900 gardeners in 90 countries working together to take a hands-on approach to championing the local food system, Roger admits this “is not so much a new idea as a good old one worth recycling.” As the first White House resident in 1800, President John Adams broke ground on a vegetable garden. And talk about eco-lawn care: During WWII, President Woodrow Wilson “hired” a herd of sheep to cut back the cost of maintaining the 18 acres of White House lawn, additionally resulting in thousands of dollars raised for the Red Cross through auctioning the wool. Eleanor Roosevelt inspired others with her Victory Garden on the White House lawn. Most recently, Alice Waters essayed to get the Clintons to plant a garden, but the idea never bloomed under that administration. Instead, the Clinton administration championed the North American Free Trade Agreement, steadfastly convinced its the economy, not ecology, that matters most.

Time to vote with our mouths and give this “Eat the View” idea prominence on the political plate. As seemingly none of the current presidential candidates have fully embraced and endorsed the idea that much of our global security links directly back to our food choices and wise use of energy (please correct me if I’m wrong here!), the White House kitchen garden can make these issues an appetizing main course in the rest of the campaign.

Of course, with planting season around the corner, the current administration could still readily get a garden up and running this season. A Resident Bush garden could bring beans and broccoli back on the national agenda. O.K., I know. Magic fairy wand time over. This upcoming season’s kitchen gardening possibilities lay in our own hands, one tomato seedling at a time.