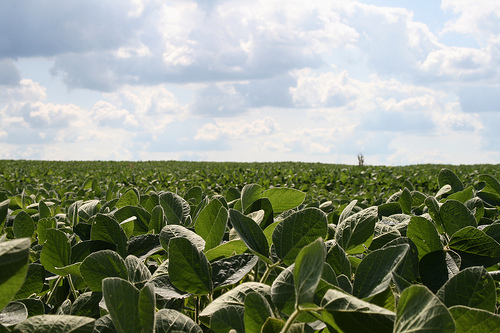 The USDA released data last week on the growth of GM crops in the US. The results are pretty dramatic:

They traced data starting in 1996, when GM crops were relatively new. Since that time, the acreage dedicated to planting GM soybeans has risen from 7.4% to a whopping 93%! That’s especially surprising, since GM soybeans produce lower yields and costs farmers billions of dollars every year.

GM corn and cotton planting has risen dramatically, too, encompassing the vast majority of acres.

It’s pretty clear that once a GM crop catches on, more and more farmers seem to adopt its use. For folks concerned about genetic modification and health, that’s quite worrisome, especially since GM foods don’t have to be labeled.

These results are all the more reason to proceed with caution when approving new GM crops. Not only is there still a question about these foods’ safety, but GM crops threaten biodiversity. Whether we’re looking at GM potatoes or Monsanto’s Roundup Ready alfalfa, it’s important to keep in mind that not only will these crops be entering the food supply, but they have potential to make up the vast majority of acreage in a relatively short time.

The best way to keep GM foods off of your plate is to stick with organic, whole foods. You might also take a look at True Food Now’s shopper’s guide for tips on avoiding genetically engineered foods.