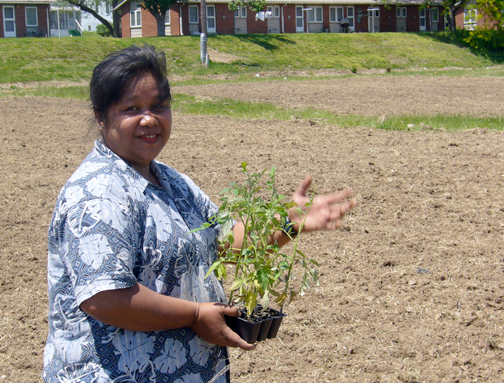 A tough row to hoe. The old saying came to my mind immediately as I watched a woman working hard soil with hand tools. Each turn of the shovel was as likely to turn up construction debris as it did soil. Surrounding this agricultural vision, the landscape is anything but bucolic. The small urban farm is centered amidst some of Kansas City’s poorest of project housing.

Yet for this woman, the area is a considerable step up. She, like most of the other women farmers here, is from a refugee camp in Somalia. A place where armed guards stand by the few water taps to prevent fights among the refugees trying to secure enough drinking water for the day. Where the main food served is a tasteless gruel of corn and soy. As hard as it is for many of us to imagine, the refugee camps are places that make even this most desperate of American neighborhoods a source of hope.

The women, from Somalia, Burma, and Burundi, are all participants in a special agriculture program for refugees. The program is partially funded through a grant from the Refugee Agricultural Partnership Program under the Department of Health and Human Services. Catholic Charities and the Kansas City Center for Urban Agriculture administer the program and help to seek additional funds and grants to support it.

What is unique about the program is that it promotes empowerment and provides a path for each of these women to become self-sufficient. Each woman is provided with tools, plants and one-quarter acre of land in which to raise organic produce to sell through a CSA and farmers market. She then saves two dollars of each $10.00 she makes to fund part of the costs for the next year ahead, then saves progressively more each year.

The CSA was offered for the first time this year through St. Pius the 10th Catholic Church. More than twice as many participants signed up with a wait list, said Charisa McDaniel of Catholic Charities.

Staff members from the Kansas City Center for Urban Agriculture provide support and training as well as help with the initial plowing and to help build the facilities that the urban farm will require such as water lines, a farmers market on site and other facilities to support the farmers.

The training can be a bit of a challenge with language barriers, but work with other immigrant farmer in programs such as Cross-Cultural Learning Networks has helped KCCUA develop their training program so that it works to educate new farmers without talking down to them — regardless of language barrier.

By the time she has been in the program for three to four years, each woman farmer will be able to run her own business with the knowledge and experience needed. The land and support are then used to help a new refugee.

While we Americans would look at the surroundings and hope to avoid a life here, for these women, the project is something more like winning a lottery — with about the same odds.

World-wide refugee numbers can only be estimated, these number into the millions. In 2007, over 300,000 refugees applied for asylum in the United States alone. Of these, less than 50,000 were allowed entry. Just a few refugees end up with an opportunity for such empowerment and their own business. Many end up in factory jobs or labor positions that offer a low wage, but no language barrier.

Given that the surrounding residents experience their own struggles for survival, it could be difficult watching a few from other countries getting such assistance from the same “system” that seems to have forgotten you exist. Community relations are critical for success. Growing this understanding and acceptance in this community requires outreach to the surrounding residents. But Kansas City Center for Urban Agriculture Co-Founder Katherine Kelly has a vision for how to make that happen.

At the end of the farm, closest to the housing, two gardens lay plowed and waiting to become community-owned. The KCCUA team went door-to-door to ask the residents if they would be interested in a community garden. Some went unopened. But more were opened. The interest in the program was mainly positive and growing.

The long-range vision is to develop the area to hold community gardens, walking paths, benches, a greenmarket, and a playground for local residents to enjoy. Making that vision a reality, however, is going to take years of hard work and funding, much of which still needs to be sourced.

“There’s a chemistry around growing things. I see the project as a positive space for interacting. Somewhere that multiculturalism can happen even in an area that has not experienced much openness and generosity itself from the wider community,” said Kelly.

She has a firm belief that the project can work and that it can empower these women who have been through so much, as well as build a better community for the residents here who need access to healthier foods and such enrichment programs. Her vision is of a place that will foster healthy eating, healthy businesses, as well as cross-generational and cross-cultural relationships.

It’s not an easy to picture, looking at the brick-strewn soil, a few women with hand tools, and the surrounding condition of the project housing. Indeed, that future is a tremendous vision to have for an area many of us would see as beyond hope. Perhaps it is Kelly’s own background as an urban farmer — one who cares for forgotten land, sows the seeds, and grows new life — that fuels her conviction and faith.

For refugees who beat the hundreds-of-thousands-to-one-odds, and a community in desperate need of improvement and opportunity, perhaps hope, like tomatoes and squash, will grow here, too.