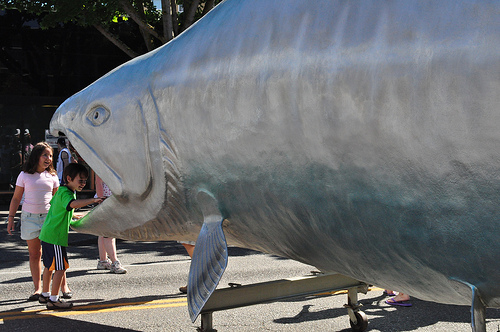 Washington, DC – Earthjustice, on behalf of Ocean Conservancy, Friends of the Earth, Center for Food Safety, Food & Water Watch, the Center for International Environmental Law, and Greenpeace, submitted a citizen petition today to the Food and Drug Administration (FDA) urging the Agency to withhold final action on an application to market the first ever genetically engineered (GE) salmon intended for human consumption in the U. S. The petition requests that FDA complete a comprehensive environmental impact statement on the risks GE fish could present to the natural marine environment before making a final decision.

After a decade of behind-the-scenes work with the GE fish sponsor, AquaBounty Technologies, FDA announced last fall that it intended to approve AquaBounty’s application. In response, the public sent over 400,000 comments to the FDA opposing the “Frankenfish” and demanding mandatory labeling of any GE fish approved for sale to US consumers. FDA has not yet taken final action on the AquaBounty application.

According to today’s petition, the application material released to the public raises serious concerns regarding potential destruction of wild salmon populations that require FDA to prepare an environmental impact statement under the National Environmental Policy Act (NEPA). The petitioners argue that the environmental assessment AquaBounty previously submitted to FDA, and FDA’s evaluation of that assessment, fails to provide necessary assurances that AquaBounty’s AquAdvantage Salmon, which are supposedly engineered to grow twice as fast as wild Atlantic Salmon, will not endanger natural fish populations by outcompeting non-GE fish.

“As far as we and the public can tell, FDA has not comprehensively assessed the full range of environmental risks inherent in the production and distribution of genetically engineered fish,” explained George Leonard, Ocean Conservancy’s aquaculture program director. “Instead, FDA is relying on the company’s own scientific analysis that no fish will escape, survive, or reproduce in the wild—even though that type of security cannot be guaranteed.”

The groups’ concerns are heightened by the fact that FDA has thus far refused to consider AquaBounty’s publicly stated intent to expand production and commercialization of AquAdvantage Salmon throughout the U. S. and abroad.

“FDA wants to consider this application in a bubble to avoid doing a more comprehensive environmental review, but if it follows the law, it simply cannot avoid the fact that this is just the first step in a broader plan to produce these GE fish and others like them around the world,” said Eric Hoffman, biotechnology policy campaigner for Friends of the Earth. “FDA must take this opportunity to conduct a thorough review of the environmental risks associated with genetically engineered fish and prevent potentially irreversible ecological harm before it is too late.”

The petition also challenges FDA’s continued closed-door review of the AquaBounty application and asks the Agency to revise its regulations to better account for the environmental risks attendant to the production and distribution of GE food animals.

“FDA’s regulatory framework for reviewing applications to market genetically engineered animals is fundamentally flawed,” said Earthjustice attorney Khushi Desai. “The process fails to ensure that FDA closely studies the full impact of such applications, and it keeps the public in the dark.”

The petitioners find the FDA approach to GE salmon woefully inadequate, and simply hard to believe:
“When you stop to consider that even other federal agencies like the U. S. Fish & Wildlife Service are wondering what in the world the FDA is thinking – literally asking in disbelief if they’ve watched Jurassic Park – you realize this is an environmental disaster waiting to happen,” said Wenonah Hauter, Executive Director of Food & Water Watch. “Unfortunately, it appears the FDA has conflicting interests since they continue moving forward with genetically engineered salmon despite strong consumer opposition – perhaps because the biotech industry has spent over half a billion dollars pushing this science experiment.”

“This genetically engineered fish has no redeeming value,” said Andrew Kimbrell, Executive Director of the Center for Food Safety. “It has lower nutrition and represents other potential hazards to consumers; it puts the entire US salmon industry at risk, and most importantly it could threaten the very survival of our native salmon populations. FDA needs to assess all these risks and then take the only rational step, which is to deep-six this hopelessly misguided and dangerous product.”