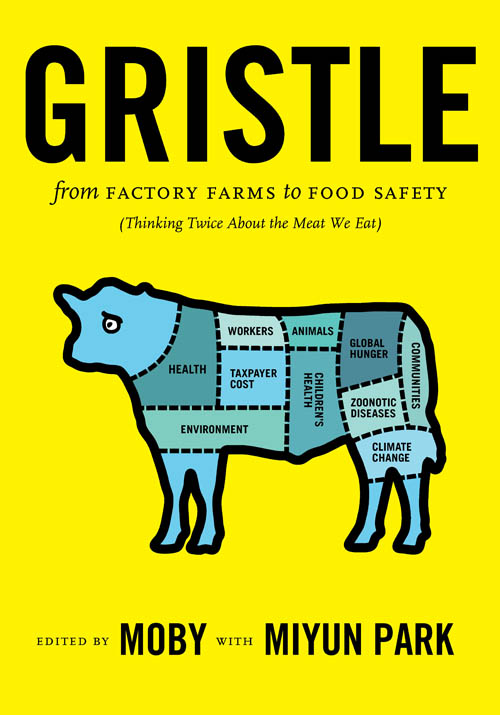 [social_buttons] Meat, especially the factory farmed variety, is just no good for people or for the environment. There’s really no getting around it. A new book, GRISTLE, looks to “connect the dots” between factory farming and its effects on human health and on the planet.

We are lucky enough to have five copies of the book to give away! Read on for more about GRISTLE and to find out how to win a copy of your own!

GRISTLE is a collaboration between pop superstar and political activist, Moby, and Executive Director of the Global Animal Partnership, Miyun Park.

The book tackles more than just the animal rights and environmental aspects of meat. It also looks at factory farming’s impacts on agricultural workers and communities. It features essays from 15 contributors who run the gamut of dietary preferences from vegan to omnivore including:

This book isn’t about veganism and it isn’t about bringing down the animal agriculture industry.  It’s about social justice and ethics and, not to sound too melodramatic, the truth. Somehow, industrial animal agribusiness has largely managed to get away with oppressing workers, making us and our children unhealthy, slowly but surely destroying rural communities, contributing to global warming and global hunger, cultivating the emergence of deadly zoonotic diseases, and polluting the water we drink, the air we breathe, and the land on which we all live—all while getting subsidized by taxpayers.

If you’re looking to purchase a copy of the book, the publishers have shared a promo code that Eat.Drink.Better. readers can use to get $2.99 off of the cover price! Just enter the code 58191GR when you purchase the book from The New Press to get your discount!

Since we’re picking five winners, we thought it would be fun to give you up to five ways to enter! For each entry, you get your “name in the hat,” so you can do any or all of them for up to five entries:

If you’re already done one of the things listed above, you can just tell us that, so you can still get those extra votes. Make sure that you include a valid email address in the mail field for your comments, so that we’ll be able to contact you if you win! We’ll announce the winners on April 16th!

Edit: We’ve closed comments on this post, because we’ve picked our winners! Want to see who won? Check out the giveaway winners announcement.