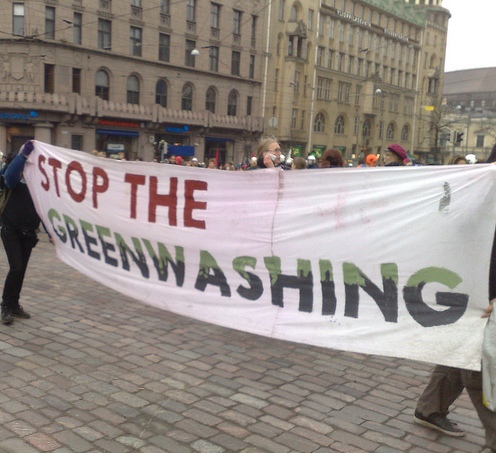 One of the biggest weapons in GMO companies’ arsenal is the claim they make repeatedly that genetically modified (GM) crops are needed to help feed to world in the face of global climate change. There’s one problem with this claim, though — it’s total greenwashing and untrue.

Monsanto advertises that biotech crops can feed the world “from a raindrop,” suggesting that GE crops are especially climate change resistant. In 2011, Roger Beachy, then-director of the U.S. Department of Agriculture’s primary research agency, the National Institute of Food and Agriculture, suggested to Scientific American magazine that GE crops protect traditional small farmers by reducing the need for agrochemicals. But this greenwashing doesn’t change what is just agribusiness as usual: more agrochemicals, more fossil fuels and more intensive agricultural production.

Theoretically, sure, GE crops could use fewer agrochemicals, but, in actuality, they are designed to survive more intense spraying than tradition crops and they do, in practice, get sprayed with a lot more agrochemicals.

Most GE crops are designed to be tolerant of specially tailored herbicides (mostly glyphosate, known as Roundup). Farmers can spray the herbicide on their fields, killing the weeds without harming their crops. Monsanto’s herbicide-tolerant (“Roundup Ready”) corn, soybeans and cotton were planted on 150 million U.S. acres in 2009. Glyphosate use on these Roundup Ready crops has grown steadily. Between 2001 and 2007, annual glyphosate use doubled to 185 million pounds.

Such widespread and excessive use of Roundup have resulted in the creation of “superweeds” that are resistant to the chemical, threaten crops to an even greater degree, and require the use of even more toxic agrochemicals. “Even the biotech company Syngenta predicts that glyphosate-resistant weeds will infest one-fourth of U.S. cropland by 2013.”

And what does this mean when it comes to crop yields and feeding the world?

“Agricultural experts warn that these ‘superweeds’ can lower farm yields, increase pollution and raise costs for
farmers. Farmers may resort to other herbicides to combat superweeds, including 2,4-D (an Agent Orange component) and atrazine, which have associated health risks, including endocrine disruption and developmental abnormalities. Moreover, as glyphosate-resistant weeds strangle cropland, farmers have returned to deep tilling for weed management, abandoning tillage practices designed to slow soil erosion.”

Studies have found glyphosate/Roundup causes serious deformities and neurological problems in vertebrates (humans are vertebrates, in case you forgot) and have found it damages human cells even when the levels of exposure are below the level recommended by the manufacturer.

There is a lot of talk about the ability to create drought-resistant crops, but no proof of their reality, and even if they could be created, there’s no precedence to show that biotech companies would really increase the creation and access to food for most people in the world who are struggling with this issue.

The research has yet to achieve the complex interactions between genes necessary to endure environmental stressors such as drought.

Traditional breeding methods for stress tolerance are more resilient to disruption and climate change than GE crops because they complement and thrive in nutrient-rich and biodiverse soil. Even if research succeeded in developing drought-tolerant crops, biotechnology companies would control any viable seeds, potentially putting new seeds out of reach for poor countries.

The grand claims of GM-crop-yield-reductions are just that, claims. While there may be potential in gene modification to create greater yields (in the short term), this is not really what the biotech companies care about. And the results show it.

Biotech companies have focused on developing crops that are designed to work with the herbicides they sell, not on developing high-yield seeds. A 2009 Union of Concerned Scientists survey found that herbicide-tolerant corn and soybeans had no yield increase over non-GE crops, and insect-resistant corn had only a slight advantage over conventional corn. A 2001 University of Nebraska study found that conventional soybeans had 5 to 10 percent higher yields than herbicide-tolerant soybeans.

A 2006 Environmental Science and Technology study found that low-input farms in developing countries had significant yield gains. A 2007 University of Michigan study found that organic farming in the developing world had higher yield gains than conventional production and could feed the global population without increasing the amount of cultivated land.

The bottom line: there’s a ton of greenwashing going on in the GM crop industry. And, unfortunately, a lot of people have fallen sucker to it.

For more on how GM crops “benefit biotech companies, not farmers” and how they will NOT “feed a hungry planet,” check out Food & Water Watch’s full Greenwashing Genetically Engineered Crops fact sheet.