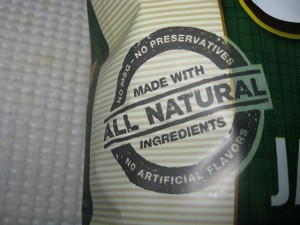 Frito-Lay, which launched their “all-natural” line last Spring,  joins a long list of mainstream companies, like that Fortune Brands (Skinny Girls Cocktails) and ConAgra (Wesson Oil), that call products all natural – even though they aren’t. Even if we put aside the attempt to greenwash GMOs, the fact remains that genetically modified corn and vegetable oils can hardly be called “all-natural.” The problem remains that the term ‘natural’ is the single most common greenwash sin (the Sin of Vagueness).  NaturalNews.com points out that the term ‘natural’ can mean just about anything; it has no nutritional meaning and isn’t truly regulated by the FDA.

As our sister site Ecopreneurist.com reported:

The part about GMO’s not being exactly what you would call “natural” is verified by none other than Monsanto, the infamous company leading genetic food research and implementation. They define GMO’s as: “Plants or animals that have had their genetic makeup altered to exhibit traits that are not naturally theirs.”

As I’ve said many times before, I don’t begrudge people the right to eat anything they like. I’ve been known to feed my kids Tostitos (and have even eaten a few myself). But when I do, I do so  knowing I’m eating regular old snack food. The bottom lime is that we can’t condone corporations calling a product ‘all-natural’ when its no more natural than any other snack food out there. So the question remains: What is Frito-Lay’s going to do about it?