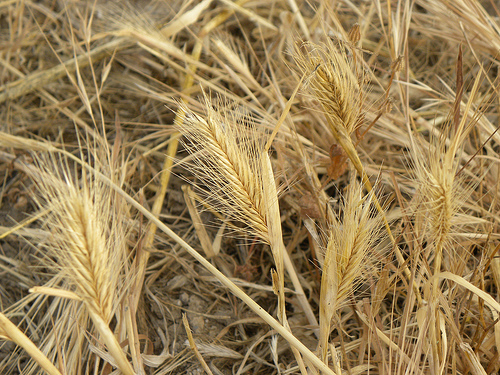 Late at night, three women entered a fenced-in field containing a genetically-modified strain of wheat. Dressed in hazmat gear and using whipper snippers (they look like what we call “weed whackers” around here), they cut the entire field of GM wheat. The wheat was not yet flowering, so there was no danger of the activists accidentally carrying pollen or seeds on their shoes or clothing.

The GM wheat had been designed to have “increased resistant starch content which in turn contributes to the total dietary fibre intake.” GM proponents often claim that we will not be able to feed the world without genetic modification of common food crops, but this one seems to be a lower-calorie, higher-fiber crop. Hungry people don’t need fewer calories.

The starch content is being controlled by the insertion of genes from wheat, rice, Cauliflower mosaic virus (CaMV), and Agrobacterium tumefaciens. According to the Technical Summary of the Risk Assessment and Risk Management Plan, “Although some of these sequences are derived from plant pathogens (A. tumefaciens and CaMV), the regulatory sequences comprise only a small part of the pathogen’s total genome, and are not in themselves capable of causing disease.”

The purpose of the field trial was to produce flour to be used in food testing in rats and pigs, and eventually in a limited human feeding trial. One of the activists talks about her motivation for opposing the GM wheat.