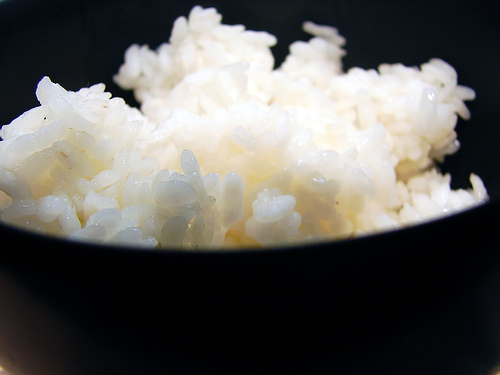 Have seasonal allergies? Just warm up some genetically modified rice for relief!

Researchers at Japan’s National Institute for Agrobiological Sciences in Tsukubahope that you think this solution sounds simply delicious. They’ve developed a rice that could help alleviate the itchiness and watery eyes associated with hayfever. And after safety tests on macaques (monkeys), researchers are excited to take the next step: humans trials.

I’d like to try this GM rice in people in the near future.

Researchers point out that the 26-week long trial on the monkeys was for safety, not efficacy. So how would this mutant rice work?

Currently, it’s a Japanese thing, designed to treat the whole 20 percent of that population allergic to Japanese cedar pollen. Researchers genetically modified the rice to contain the seven proteins within cedar pollen that provoke the most serious allergic reactions in people. They said they already had success in mice. (Now they don’t have to carry around those teeny tiny handkerchiefs any more.)

In a sense, they’re giving people a holistic “oral dosage” to try to damp down the allergic reactions over time. But there’s nothing holistic about this.

Researcher Takaiwa hopes that the next step will be other GM foods. Wow…let’s all cross our fingers!

If our rice works well, I think the atmosphere around GM food will change.

And here’s my next question: What will they cram down our throats once we become allergic to the genetically modified stuff?

Image: visualpanic on Flickr under a Creative Commons License.