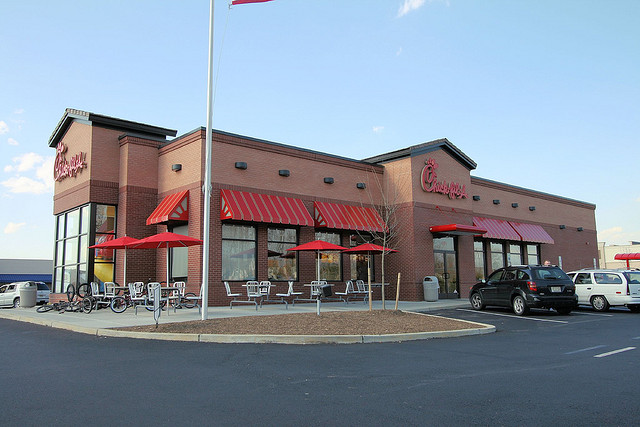 Chick-fil-A has come under fire in the past few months after company owner Dan Cathy’s homophobic remarks brought to light that the company has donated millions of dollars over the past few years to anti-gay organizations. Now, Chick-fil-A executives says the company is going to stop giving money to these groups and promise equal treatment to all employees, regardless of sexual orientation.

Critics of the anti-Chick-fil-A protests said that they infringed on the company’s freedom of speech, which is not accurate at all. No one said that Dan Cathy can’t be homophobic or even that the company can’t donate to hate groups like the American Family Association. What protesters were saying was they didn’t agree and they wouldn’t give Chick-fil-A their money. They were exercising their right to free speech, and the company listened.

According to a press release from LGBT rights group The Civil Rights Agenda:

Alderman Moreno has confirmed that Chick-fil-A will no longer give money to anti-gay organizations and that they have clarified in an internal document that the company will treat every person equally, regardless of sexual orientation. The Civil Rights Agenda worked closely with the Alderman in an advisory role as he negotiated these concessions with the executives at Chick-fil-A.  Additionally, members of TCRA spoke directly with executives at Chick-fil-A during negotiations to aid in educating their decision makers about anti-discrimination policies and issues affecting the LGBT community.

The company has also released an internal memo to its franchise owners and stakeholders stating that all employees should receive equal treatment, no matter what their sexual orientation.

Rick Garcia at The Civil Right Agenda points out that releasing a memo is not the same as adopting a corporate policy, and he’d like to see Chick-fil-A take things a step further to fight the “culture of discrimination” that he says gay employees at Chick-fil-A have reported. You can check out the full press release from The Civil Rights Agenda here.

Is Dan Cathy still a homophobe? Yep. Does Chick-fil-A still serve factory farmed meat and highly processed food? You betcha. But this shift in internal policy and their promise to no longer financially support anti-gay organizations is definitely a step in the right direction. Here’s hoping that they continue to make progress in this area and adopt equality as a corporate policy!

I know that most of the EDB’ers out there probably weren’t eating at Chick-fil-A to begin with, but now that they’ve changed their policies, would you stop in for some waffle fries or a lemonade in a pinch?