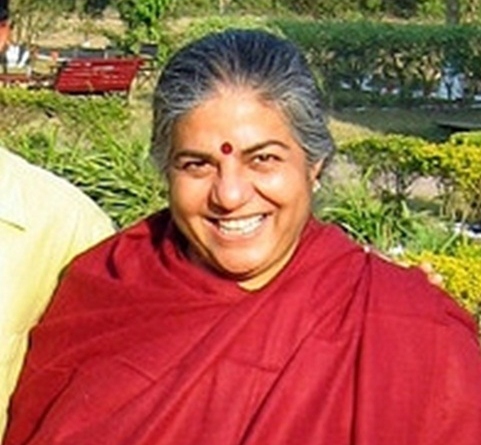 Described as a “global advocate for social justice,” and “a rock star in the worldwide battle over genetically modified seeds,” Dr. Shiva presents a powerful indictment of biotechnology giants who have hijacked the global food supply for the gain of the few, at the expense of the many.

Shiva’s eloquence, knowledge, and vision make this interview a must-watch for anyone concerned with food ethics, world hunger, sustainability, human rights, or the well-being of actual (versus corporate) ‘people.’

Moyers: “It’s an uphill battle you’re waging; how do you keep doing it? What drives you, really?”

Shiva: “You do not measure the fruit of your action; you have to measure your obligation for action. You have to find out what is the right thing to do — that is your duty. Whether you win or lose is not the issue.”

Seed is “the most fundamental source of livelihood, in a poor country. 80% of the food of the world is even today produced by those small farmers… Our small farmers are feeding 1.2 billion Indians! We forget the scale of what smallness means, multiplied many times. Because we’ve gotten used to the dinosaur mentality: we only see the big! We forget that dinosaurs go extinct.”

Moyers: “You say that corporations have hijacked our food system. How so?”

Shiva: “I come from a country where there were no corporations in the food system, until 20 years ago. They weren’t allowed to be — our rules said food was too precious. It was an important source of livelihood, so we had to protect our small farmers… everything worked so that small farmers could have a living…

Globalization changes everything… from the seed to the table, corporations are saying, ‘We want to be the only players’… that is a corporate hijack of our food, and a corporate dictatorship over our food system.”

Moyers points out how difficult it’s been to hold Monsanto accountable for problems caused by their products, citing a recent failed suit against Monsanto by organic farmers.

Shiva: “Yes, that case has been sad… In my view, it’s the same kind of status that says corporations can have freedom of speech, and therefore they can hijack our democracy.

Let them spend as much money as they can, to literally buy elections! But for every case of this kind, there are other cases being won. We have won cases against Monsanto in India…”

Moyers: “But if something like this is as bad as you describe it, if it’s a monster roaming the countryside, how is it getting away with it?”

They are getting away [with it] because they’re using governments to shut down alternatives, and push [GM] seed against the will of people.

“So on the top there’s Monsanto, hijacking all our governments, and through that they’re trying to hijack our food supply; and from the ground, farmers, consumers, and regional governments saying, ‘We want a Monsanto-free food system. We want Monsanto-free GMO-free patent-free seed.’ “

Moyers raises the question of world hunger, pointing out that GMO proponents often argue that we need GM crops in order to feed a growing global population.

Shiva asserts that those individuals are “sadly mistaken” in their assumption that GM crops produce more food. Introducing genetically engineered seed means introducing toxins (such as Roundup) to whole ecosystems, including other crops growing alongside GM corn, soy, or cotton. Effects of these toxins, and the facilitation of resistant superweeds in surrounding fields, often result in LESS food being produced for the farmer and his or her family.

Government studies have repeatedly found this to be the case in India, after the introduction of GM crops. Far from facilitating increased food production, Shiva says, when you make traditional farmers dependent on patented GM seeds,

Dr. Shiva was heavily influenced by Albert Einstein, and credits his influence with her decision to study physics. In the context of Shiva’s work in speaking out against the destructive impact of GMO-driven agriculture, and calling for a more sustainable food system, Moyers paraphrases an Einstein quote: ‘Unless an idea is at first absurd, it has no chance of success.’

Shiva: “Absolutely! He also said that you cannot solve the problems you face through the same mind-set that caused those problems.”

Every interview like this drives another nail into the coffin of consumer ignorance, which Monsanto and the other biotech giants absolutely depend on for success. There’s a rising sense of outrage, among American consumers, at the lack of transparency and accountability within our food system.

Vandana Shiva offers a powerful call for a fundamental shift in the way we relate to our food, to our world, and to each other. She is a passionate and prolific author and speaker, and a formidable advocate for much-needed change.

Use your social networking media to add your voice to Vandana Shiva’s: share this interview widely, and help that change emerge!

Monsanto’s will trumped that of voters and their elected representatives, in Vermont and Connecticut earlier this year. They’re already bringing out the big-money bazookas to fight California’s GMO labeling initiative this coming November. The biotechnology industry knows that an informed consumer base will not support their current destructive practices; so they’re fighting desperately against fair labeling of GMO foods.

If you think current GMO practices are destructive, and that people have a right to know whether or not they’re supporting GMO agriculture, here’s what you can do (after sharing this video with everyone you know)!

Mainstream media’s increasing willingess to cover food issues like agricultural antibiotic abuse and GMO labeling reflects a growing demand for a fundamental revision of our modern food system, away from the profit of the few and towards the good of the many.

Consumer knowledge and citizen action are the only roads on that map.