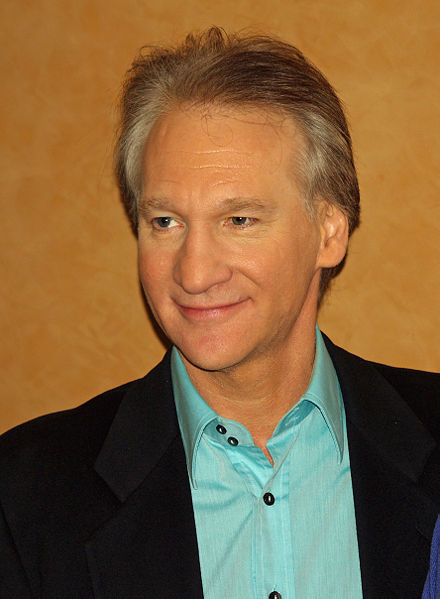 The June 27 episode of Real Time With Bill Maher features a rowdy discussion of the pros and cons of labeling on genetically modified foods. Like pink slime, mainstream interest in the GMO labeling issue appears to be growing by leaps and bounds. If this trend continues, Monsanto may have a hard time putting the GMO public-awareness genie back in the bottle!

As you watch the discussion, listen closely to the arguments against GMO labeling — sorry, I meant to say argument. As in, singular noun. The one argument offered by the anti-labeling fellow, in my opinion, isn’t the one dearest to Monsanto’s dark little corporate heart (i.e. profitability of GM seeds and related pesticides). But it’s every bit as weak!

I love seeing food revolution issues on mainstream media, and I love how the only argument the anti-labeling guy could come up with was “We shouldn’t require GMO labels because they haven’t been proven to cause harm.”

This is like the “eating meat is natural” thing that people say to vegetarians: a total bunk argument, that won’t stand up to even the mildest scrutiny, but people throw it down on the table with a flourish as if to say, “Ta-da! Argument over!”

Um, no. There’s some foolishness on that table, just begging for critical consideration!

There are at least three problems with the argument GMO food labels shouldn’t be required because ‘they haven’t been proven to be harmful.’

Consumer Choice: My Body, My Rules

First of all, we label all kinds of things that ‘haven’t been proven to be harmful’: I’m allowed to know whether products contain milk, eggs, MSG, red dye #3, high fructose corn syrup, mono- and di-glycerides, torula yeast, and many other ingredients that I might choose to avoid for reasons that make sense to me — whether or not the manufacturers of these foods agree with me. Indeed, I’m sure they don’t! But that’s no reason not to label them. GMOs have done nothing to earn an exception to the rule we apply to other food products. It should be my right, not that of food manufacturers, to decide what substances I will consume or avoid.

The FDA has a long history of requiring manufacturers to accurately label foods ‘that have not been proven to be harmful,’ so that shoppers can make informed choices about what to eat or not to eat — for whatever reasons make sense to them.

Consider some highlights from FDA history:

Given this set of guidelines supposedly in place for US food, our ongoing lack of GM labeling is a tribute to the biotechnology industry’s resourcefulness and determination to avoid it.

People have the right to choose what to buy, what to eat, and what to feed their families. It doesn’t matter whether GMO producers agree with consumers’ decisions or not. For whatever reasons, many people simply don’t want to buy genetically modified food — and shouldn’t be forced through deceptive labeling to do so, solely for the benefit of the biotechnology industry.

The second (more troublesome) problem with the argument that ‘GMO foods haven’t been proven to be harmful’ involves the persistent ferocity with which the biotechnology industry has prevented scientific exploration within that very field of inquiry.

In one 2010 report on health concerns surrounding Roundup-Ready soybeans and glyphosates, authors also point out that:

Chronic, reproductive, and developmental toxicity studies take as long as two years to study in rodents, and can involve multiple generations; these studies are notably lacking, in current (industry-conducted) safety research on GM foods. Considering the prevalence of GMOs in our food supply at present, many consumers find this emphasis on only acute and subchronic toxicity irresponsible and disturbing.

American health has changed dramatically in some ways over the last 30 years — since widespread introduction of GMO foods into the American diet, though no one knows if that’s coincidental or not — diabetes, food allergies, obesity, some cancers, autism, and some other health problems have experienced sharp spikes in incidence since GMOs flooded the US food market.

The biotechnology industry wants to say their products are safe, while fighting fiercely to prevent any labeling that would make it possible to actually know whether that’s true or not! If there are truly no problems associated with high rates of GMO food consumption, Monsanto should absolutely love labels; because that’s the path to actually being able to scientifically ask that question, and to answer it.

If I don’t think those questions have been adequately answered, I should have the right to avoid GMO products until an increased body of skeptical and transparent independent research changes my mind. That should be my decision; no one else’s. Mandatory labels would make it possible to study  potential problems using actual objective scientific inquiry, while enabling consumers to avoid GMO foods unless and until they’re convinced otherwise by thorough (sound, unbiased, independent) research.

Imagine — just for a moment — that in an alternate Universe Monsanto is a kinder, gentler company, deeply committed to thorough  and unbiased health and safety research on all new GMO food products (I know: mindbending exercise, right?!)… Even in this alternate ideal world, where health and safety research concerns are completely nonexistent, there would still be excellent reasons to label GMO foods! So, again, the proposed argument against GMO labeling is bunk.

Transgenic crops have the potential to impact complex ecosystems in ways that laboratory models cannot predict. Once a new gene or gene combination is released, there is no way to call it back to the lab if problems emerge.

Resistance to certain herbicides such as glyphosate (the active ingredient in Roundup) tends to transfer to ‘pest’ plants, resulting in the need for ever-escalating chemical warfare against herbicide-resistant ‘superweeds.’

Reliance on GM seeds creates social justice issues that other methods of farming do not. GMO crops can be devastating to small farming communities, by fostering dependence on seed suppliers. GMO agriculture in traditional communities can also be devastating in terms of biodiversity loss, impact on pollinators, and the facilitation of herbicide resistant weeds.

Many consumers would choose to avoid GMO foods for environmental or other ethics-driven reasons, given a fair choice. The argument that (since scientifically rigorous investigation has been stifled at every turn) GMO foods have not been ‘proven’ to cause health risks doesn’t negate all the other reasons people might want to avoid them. Consumers should have the right to make that choice.

There are many good reasons to require labels on GMO foods, and (unless you own stock in Monsanto or Dow, or they pay your salary) no good reason not to do so.

People shouldn’t be tricked into eating something they wouldn’t voluntarily eat — for whatever reason! — if it were labeled. With growing awareness of the issue, the US just might be on the verge of catching up with the nearly 50 countries that already ban or require labels on GMO foods. Bill Maher has officially earned a (prestigious and widely coveted!) EatDrinkBetter tip of the hat, for helping out with that public awareness. Good work, sir!

With ever-increasing consumer awareness and support, mandatory GMO labeling in the US may be just around the bend. Support the GMO labeling initiative in California — and join GMO Free USA! — if you think it’s about d*** time.