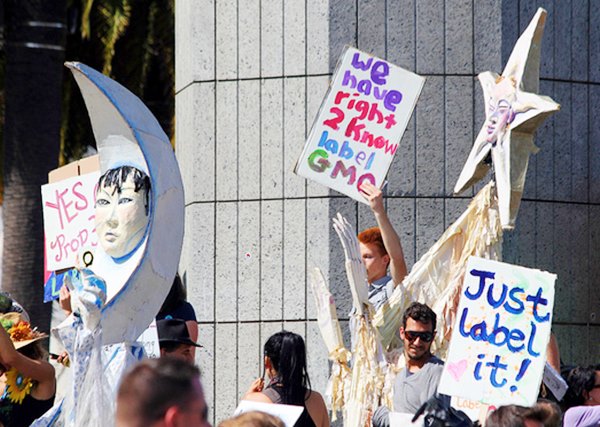 GMO labeling bill H. 112 passed the VT House last week, and heads for the Senate in January 2014. The bill’s early strong performance is (yet another) indicator of the overwhelming shift in public consciousness — and public policy — towards more responsible labeling of foods containing GMOs.  Congratulations democracy, and congratulations Vermont! Now: KEEP IT UP!

The bill would require labeling for foods sold in VT containing genetically modified ingredients, and would go into effect 2 years after passing — or 18 months after at least 2 other states mandate GMO labeling, whichever comes first. Food pundits on both sides of the issue expect Monsanto and possibly other biotech corporations to stomp their giant litigious feet in apoplectic rage, since the very last thing they want is for consumers to be allowed to choose whether or not to buy their products.

So, ok, yes: Vermont has a weak record on standing up to bullies. But presumably they wouldn’t be bringing a labeling bill to the table again, if they just plan to run away squealing (like last time) when Monsanto says ‘boo!’ to representative democracy.

Genetically engineered foods flooded the US market, unlabeled, back in the 1990s. In 2005, Alaska passed a law requiring fish and mollusks raised in that state to be labeled if they were genetically engineered; since then we’ve seen a steady escalation in public demand for fair and accurate labeling of genetically modified foods.

Given this set of guidelines supposedly in place for US food, the ongoing lack of GMO labeling is a tribute to the biotechnology industry’s resourcefulness and determination to avoid it.

The movement for fair labeling of GMOs grows daily, as ever more people realize what’s at stake. If you’re in VT, contact Vermont Right to Know GMOs to get involved!

Consumer knowledge plus action equals change — and whether Monsanto likes it or not, that change seems to be happening. So good job, Vermont! The nation’s watching…

Keep up the good work!