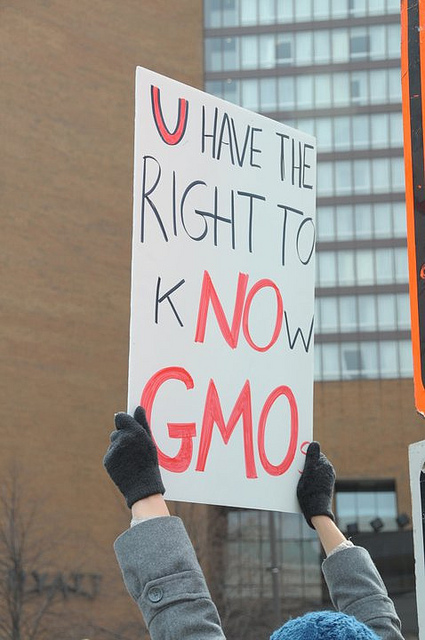 A California GMO labeling initiative met requirements last week for inclusion on the November 2012 ballot. Biotechnology interests have already begun an all-out assault with big marketing guns, towards convincing CA voters that (despite all evidence to the contrary) they actually don’t want GMO foods labeled. Will pro-consumer forces be strong enough to stand the onslaught?

The California Right to Know Genetically Engineered Food Act needed 504,760 verified signatures of registered voters to win inclusion on the November ballot; proponents delivered 971,126, exceeding both legal requirements for ballot approval and their original goal of 800,000 signatures. California Secretary of State Debra Bowen announced in a June 11 press release that the measure had passed the signature threshhold, and was officially approved for appearance on the ballot this fall.

According to Natural News,

A passage of this initiative could spell the end of GMOs in America, as food  producers already know that if given a choice, 90+ percent of consumers would  choose to avoid genetically engineered food. For this reason, food  producers would be forced to switch to non-GMO sources for their food  ingredients. This, in turn, would see a near collapse of GM seeds being planted  in fields across America.

The biotech giants are understandably displeased. Despite overwhelming support for GMO labeling in the US, so far they’ve managed to block it at every turn. But for the first time in US history, it’s a ballot initiative; this time, they can’t just bully our elected representatives into prioritizing Monsanto’s interests over those of voters.

In November, California voters will have the opportunity to make their state the first in the union to mandate GMO labels. Vermont and Connecticut legislators rejected that opportunity earlier this year, cowed by Monsanto’s legal bluster. But since the California Right to Know GE Food Act is a voter initiative rather than a bill, to successfully impose their monolithic legal will on the people of California Monsanto would have to individually threaten each registered voter with infinite legal persecution if they vote ‘yes.’

Monsanto and their industry consorts could probably do that; but it’d be a lot more hassle and headache than just menacing a handful of elected representatives. So instead — at least as ‘plan A’ — they’re marshalling vast resources towards convincing California voters that they don’t want what (according to every poll so far) they actually do want: GMO food labeling.

On June 13 the industry-funded ‘Coalition Against the Deceptive and Costly Food Labeling Proposition’ issued a press release calling GMO foods “some of the safest and most thoroughly-tested food to ever enter our food supply.”

The fact that testing for chronic, reproductive, and developmental toxicity has never been adequately investigated, that GMO crops have hurt farmers, that reliance on GMO agriculture has reduced biodiversity at a national and global level, causing unforseen environmental impacts — or the fact that all  ‘testing‘ has been done behind closed doors by the very entities poised to benefit most from GMO product approval — is of course conveniently (and unscientifically) omitted from the statement.

The Coalition Against Costly Food Labeling Proposition (CACFLP) runs a website called stopcostlyfoodlabeling.com, giving the impression that this is a group concerned about protecting consumers’ wallets. But the website lists only one consumer group in its coalition – Consumers Coalition of California. A search of the IRS.gov site turns up nothing on this group. According to the coalitions’ 2009 990-Form published on Guidestar.org, this Torrance, Calif.-based coalition describes itself as “Research and oriented community education studies and info for residential and small businesses advocating on issues affecting major legislation.” The group has no website. No other national or California-based consumer groups are listed on the CACFLP site…

… The newly launched website, Find Our Common Ground, may not fit in the heavy-hitter category, but it’s another example of a thinly veiled attempt by a group to look as if it’s working for small farmers, gardeners, and health-conscious folks.  The group also has a facebook page, to help spread its folksy message.

“Consumers aren’t getting the real story about American agriculture and all that goes into growing and raising their food. We’re a group of volunteer farm women and we plan to change that by doing something extraordinary. Our program is called CommonGround and it’s all about starting a conversation between women who grow food, and the women who buy it. It’s a conversation based on our personal experience as farmers, but also on science and research. Our first goal is to help consumers understand that their food is not grown by a factory. It’s grown by people and it’s important to us that you understand and trust the process. We hope you’ll join in the conversation.”

The message maker? A quick search on Wois.com reveals that Osborn Barr Communications, a PR company with ties to – who else? – Monsanto – owns the domain name. Osborn Barr specializes in agriculture and rural communities and is used to create front groups for their clients.  In 2006, Monsanto hired Osborn Barr to work on the controversial recombinant Bovine Growth Hormone issue, so Osborn Barr set up American Farmers for Advancement and Conservation of Technology (AFACT), a pro-rbGH farmer front group.

Fiction, Deception, and Spin: What Science Is Not

Framing itself as an unbiased science-driven organization, rather than a contrived and shamelessly deceptive corporate marketing tool, the Coalition Against the Deceptive and Costly Food Labeling Proposition (you can tell by their name just how unbiased and scientific they are!) asserts that:

Leading scientists and academics today issued a statement in response to the qualification of a measure on California’s November ballot that would require mandatory labels of food grown or produced using genetic engineering. Like the overwhelming majority of scientific and medical experts and the U.S. Food and Drug Administration, these scientists believe that foods made with the benefit of modern biotechnology are safe and that labeling them as “genetically engineered” would mislead consumers by creating the false impression that foods containing GE ingredients are less safe than foods made without the benefit of biotechnology.

In reality, actual scientific groups have been continually thwarted in their efforts to assess health and environmental issues surrounding GMO foods and crops. Monsanto has repeatedly been caught engaging in corrupt, anti-science behavior for maximum financial gain at any cost. The decision to allow GMOs to slip unlabeled into the US food supply was political, not science-driven. Stating well-funded fiction assertively within a press release does not transform it into fact.

If the data were actually on their side, Monsanto et al would not need to fake it. There would be actual grass roots organizations NOT run on a multi-million-dollar-budget by industry hacks, with actual consumers as vocal and committed as members of the Institute for Responsible Technology, Organic Consumers’ Association, Food Democracy Now, JustLabelIt, LabelGMOs, and (an exciting new grass roots group everyone should check out!) GMO-Free USA.

The GMO debate is not between pro-science and anti-science forces; it’s not even truly about pro-biotechnology or anti-biotechnology ideas. Anyone who tells you differently is selling something.

The core of the issue is GMO regulation targeting corporate versus consumer benefit, and that’s a hard sell for Monsanto in any reality-based debate: hence the big-league fact manipulation and PR spin.

Only time will tell whether voters are gullible enough to fall for it.

Reason-based (vs. PR-based) analysis indicates that GMO labels will not significantly raise food costs; will not open food producers to unreasonable lawsuits; will not in fact have any negative impacts on anyone other than the multinational biotech megacorporations who have run roughshod over US consumers for the last thirty years — since GMOs were introduced to our food supply en masse, inadequately tested and determinedly unlabeled.

The only entity who benefits from the current culture of deception and secrecy in food labeling — fortunately — lacks voting rights in California.

Don’t sell them yours!

Vote Yes on the California Right to Know Genetically Engineered Food Act, or on anything like it that inspires so much industry huckterism: that’s a pretty good indicator it’s an excellent idea.