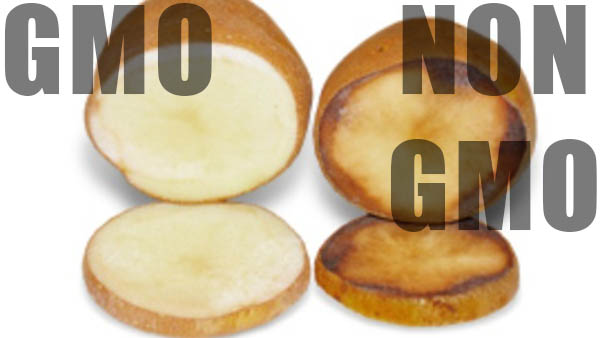 USDA recently approved a new GMO potato. Will we see GMO potatoes on store shelves? And are they safe?

In a recent report from Capital Press, a McDonald’s company spokesperson said, “McDonald’s USA does not source GMO potatoes nor do we have current plans to change our sourcing practice.” But the fast food giant rejecting this new potato doesn’t mean it won’t go to market.

The Innate potato is genetically modified to bruise and brown less easily and to “produce less of a potentially cancer-causing compound when fried,” according to Capital News. You’d think that that last trait would mean that the biotech company who created Innate potatoes was targeting fast food chains, but he J.R. Simplot agribusiness company has other plans.

The USDA has already approved the Innate potato, making it one of the first GMO foods selling in its unprocessed form.

This also isn’t the first GMO potato to hit the market. The USDA approved five varieties of Monsanto GMO potatoes, but the company had trouble selling them.

J.R. Simplot thinks that its GMO potato has a better chance of appealing to consumers, because they’re using genes from potato varieties, not from other plants or from animals. These GMO potatoes also don’t have built in pesticides or any resistance to pesticides.

There are folks still concerned about the Innate potato’s safety. While it’s true that they’re only using other potato genes, the Innate potato is produced using something called RNA interference (RNAi). According to the Center for Food Safety (CFS), we may want to question the safety of RNAi and the Innate Potato.

CFS director of sustainable agriculture Doug Gurian-Sherman, Ph.D. said in a statement, “We simply don’t know enough about RNA interference technology to determine whether GE crops developed with it are safe for people and the environment.  If this is an attempt to give crop biotechnology a more benign face, all it has really done is expose the inadequacies of the U.S. regulation of GE crops.  These [USDA] approvals are riddled with holes and are extremely worrisome.”

Another CFS spokesperson worries that these GMO potatoes might encourage folks to eat more fried foods, since they’re touted as producing fewer carcinogens when you fry them. CFS policy director Elizabeth Kucinich said, “In creating the false illusion that fried potatoes are now healthy, the Simplot potato sends the absolute opposite message.” The gene linked to carcinogenic fries also protects potato crops from disease, and opponents worry that long term these potatoes could actually pose a food security risk.

Farmers also worry that these new GMO potatoes could cause trade disruptions similar to the ones that they saw with Japan when Monsanto tried to release their GMO potatoes. J.R. Simplot is working on how to grow “identity preserved” potatoes to put these trade worries to rest.