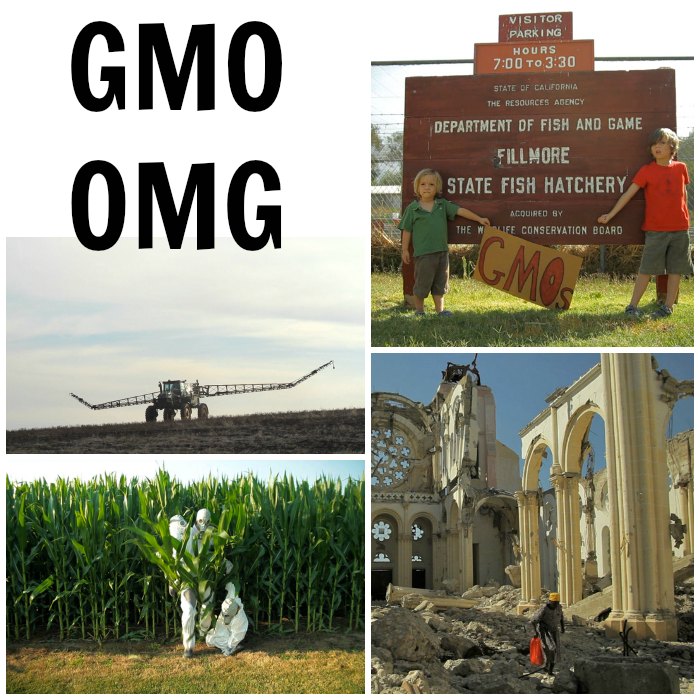 GMO OMG is a food documentary that makes learning about the truths of our food system engaging and entertaining.

I was lucky enough to get a VIP pass to see GMO OMG at The Plaza Theater here in Atlanta, and I’m so glad that I did! The filmmaker – Jeremy Seifert – uses humor and a kickass soundtrack to educate the audience about GMOs.

If you follow food politics, there isn’t a lot to GMO OMG that’s new or surprising, but you’re also not the film’s target audience. This documentary’s purpose is to shine a light on GMOs, an issue that the general population is shockingly uninformed about. The film starts out by asking random people on the street if they know what GMOs are. Pretty much no one knew exactly what GMOs are. These were my two favorite quotes from those man-on-the-street interviews:

Do they taste good?

So how do we know if we’re eating them?

The film actually does answer both of those questions along with a pretty solid primer on what GMOs are, how they became a part of our food supply, and the major concerns that accompany the rise in GMO crops.

Seifert starts learning about GMOs as he’s raising his two over-the-top adorable sons. Seeing the GMO issue through a parent’s eyes was very powerful for me. I can relate to how having kids makes you think about food in a new way. And I was pretty concerned about food – and GMOs – already!

I also relate to the idea that you can’t protect your kids from all of the toxins that are out there. He cites examples like methyl iodide in strawberries, flame retardants in furniture, and toxic toys. Once you dive down that rabbit hole, it does sometimes feel like you can’t keep toxins away from your kids, doesn’t it?

The film is basically one family’s journey as they learn about what GMOs are and how they got into our food system. One moment that really struck me was when he takes his sons to a cornfield and tells them about how he used to run through cornfields when he was little, but you can’t just run through these GMO corn rows, because they spray so many pesticides on them.

They need special hazmat suits that look like radiation suits. As he’s strapping his children into the suits complete with gas masks he tells them,  “We’re almost ready to have fun.”

I think the best point that Seifert makes in this film isn’t the stuff about how GMOs directly affect our health. Instead of dwelling too much on the GMO and health controversy, he spends most of the film on  the rise of superweeds, increased pesticide use on GMO crops over time, that the pesticides that go hand-in-hand with GMO crops are poisoning our air, water, and soil, and the problems that GMO monoculture present to our food security.

I’m not going to go through the whole film point-by-point, but I do want to share a few of the moments and quotes that really stuck with me. If you do want to check out all of the points that Seifert makes, I definitely recommend tracking down a screening or buying a copy of the DVD. Here’s the trailer, to give you a taste:

And, as promised, here are a few of the most powerful moments from the film for me. My only real criticism is that they only fonted interviewees the first time they showed them, so I wasn’t 100% sure who everyone was, because I was taking notes while I was watching. That’s why the quotes below aren’t all attributed.

Whole Foods worker, when Seifert asked if their packaged food was GMO free:

If it’s not organic it’s most likely genetically modified.

The family farm is going by the wayside in a hurry.

He talked nostalgically about his dad saving corn seeds.

Seifert, after realizing that no GMO chemical company was going to talk to him for an interview:

Weren’t they proud of their products? Wouldn’t they want to show off their innovations?…But I never heard back from any of them.

Organic farmer on GMOs and health:

I don’t know if GMO grains are better or worse for you or healthy or not healthy. […] That’s not the point to me. These people are trying to patent nature. [….] To think they could own nature. Patent plants like that. I don’t think it’s moral.

They also talk about the results of the Rodale Farming Systems Trial: a 30 year study that looked at organic vs. GMO crop yields:

Dennis Kucinich on GMOs and the precautionary principle:

We do not know the effect of this grand experiment that’s being visited on humanity by the purveyors of genetically modified organisms.

Seifert talks about how avoiding GMOs can actually be very isolating, which is something with which I can definitely identify:

GMO OMG is sort of an emotional rollercoaster. Seifert pairs some very scary facts with beautiful music and plenty of humor. He also ends the film on a hopeful note, talking about the states that are passing GMO labeling laws. The more we as consumers learn about GMOs, the less we want them in our food supply.

Have any of you guys seen GMO OMG yet? I’d love to hear about what struck you most about this film.