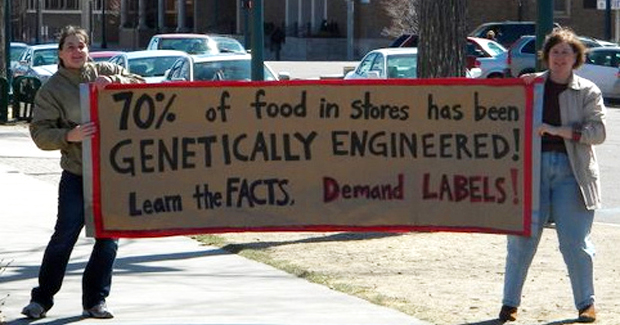 In April, Monsanto threatened to sue the state of Vermont if GMO labeling bill H-722 became law. The bill would have made VT the first state to require mandatory labels for foods containing genetically modified ingredients, usually from large scale agribusiness. Vermont caved, despite overwhelming support for H-722 by bipartisan legislators and those who put them into office.

Four separate polls showed that over 90% of VT residents want GMO labeling; but who cares?! They’re just lowly citizens, within an allegedly representative democracy. Monsanto feels that mandatory labeling would hurt their profits; so obviously that renders government of, by, and for the people null and void.

According to Vermont Right to Know GMOs,

On April 20th the House Agriculture Committee voted 9-1 in favor of labeling of genetically engineered foods sold in Vermont. The vote came after the Committee had heard nearly a month’s worth of testimony, including the April 12th public hearing when hundreds of the bill’s supporters packed the House chamber. The more than one hundred citizens who testified unanimously called for passage of the bill.

But then Monsanto huffed and puffed and threatened to blow Vermont’s legal house down. So, never mind! Despite overwhelming support from the people and their elected representatives, H722 failed to become law during this legislative session.

Now Connecticut’s HB-5117 has fallen to the same corporate scythe. According to a recent Food Consumer report,

The state of Connecticut was on the eve of a historic vote.  With 90% of Connecticut residents in favor of GMO labeling, pre-vote tallies indicating that a bi-partisan majority of legislators were in favor of the bill, and an unprecedented awareness of GMOs in CT, everything seemed to be falling into place for CT HB 5117, An Act Concerning Genetically Engineered Food.

Unfortunately, in a devastating turn of events, before the bill had a chance to make it to the floor for debate and a vote, in a closed door meeting, Governor Malloy and his attorneys interfered in the legislative process by removing Section 2 of the bill.  Section 2 was the heart of the bill, the section that called for mandatory labeling of all products produced with the process of genetic engineering, leaving HB 5117 meaningless.  Governor Malloy chose to put the interests of the monstrous biotech industry in front of the rights of the people of Connecticut.

If you’d like to tell CT’s Governor Malloy what you think of putting corporate interests ahead of citizens’, please do so:

Vermont and Connecticut were two of seventeen states with GMO legislation pending; California is looking like the next big battleground for this issue. California has a huge number of educated consumers, natural food enthusiasts, and progressive activists; it’ll be interesting to see if they’re so easily cowed by Monsanto’s bluster.

Who knows — stranger things have happened in California — maybe that state’s governmental body will actually do its job, and serve the people it was elected to represent!

Meanwhile, remember the recent pink slime debacle: after years of persistent governmental non-regulation, consumer knowledge and action changed the game completely. Presto change-o: no more pink slime! Waiting for change to trickle down from on high — where Monsanto is clearly king — isn’t the best plan, when it comes to GMO labeling.

Remember that the American consumer reigns supreme, and each and every organic and Non-GMO food vote you cast with your wallet will likely carry more weight than the votes of our legislators in support of GMO labeling bills.

Here’s what you can do:

Unless Monsanto can go ahead and get voted into office somewhere, in the long run I think they’re gonna have a hard time mandating laws nationwide. Vermont and Connecticut each had the chance to be the first state to start the tidal wave of GMO regulation that consumers clearly want. They dropped the ball; but the game’s still on.