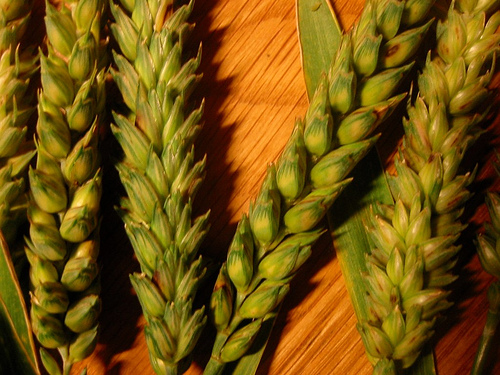 GMO giant Bayer CropScience has announced they will research drought resistant varieties of wheat without the use of genetic modification.

Bayer has been making a series of deals and partnerships to improve their access to various traits in order to improve wheat.

They plan to use marker-assisted breeding techniques, where the scientist can tell which traits are contained in a seed without taking the time and expense of growing the plant. This helps ensure that only those plants with the preferred traits will be grown and tested.

No Market for GM Wheat

Many countries have banned or are trying to ban genetically modified food altogether. Many others require labeling for genetically engineered foods.

Bayer is playing catch-up with their new program to use non-GM breeding methods in wheat. Other companies, universities, and government organizations have made great strides in breeding drought- and salt-tolerant wheat varieties. Dry soils often have a high salt content.

CSIRO has developed a salt-tolerant variety of durum wheat using traditional breeding methods.  The wheat had a 25% higher yield under stressed conditions than its parent variety.

CSIRO is Australia’s national science agency and is hardly anti-technology. They recently made news when protestors destroyed a trial field of a lower-calorie genetically modified wheat.

This year’s drought in Texas provided an excellent test of drought-tolerant (and heat-tolerant) wheat varieties.

It’s not surprising that a major biotech company is putting money into non-GM research. It’s what the people want.