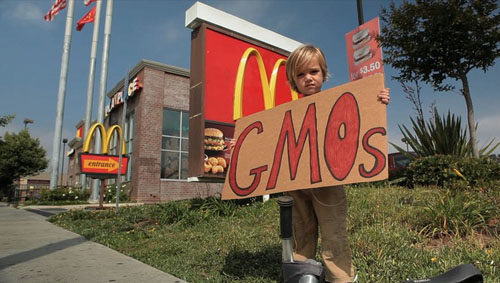 Not too long ago, we pointed you guys to a food documentary that was looking for funding via Kickstarter, and now there’s another awesome-looking food film that needs our support! The yet-unnamed food documentary (we’ll just call it the GMO Film Project for now, OK?) is tackling a food-related issue that’s very close to my heart: genetically engineered foods.

Here’s their Kickstarter trailer, to give you more of a feel for what the GMO Film Project is about:

Filmmaker Jeremy Seifert needs to raise $25,000 to pay for travel and production costs as he explores the issue of GMOs in our world’s food supply. Spurred by Haitian farmers burning Monsanto’s donated seeds, Seifert went to Haiti to find out why these small farmers were so opposed to the GMO giant.

I stumbled on the project while poking around on Vimeo. There, I came across their “sizzle reel,” which I found really intriguing. Here’s the reel that caught my eye:

If you want to donate to support Seifert’s GMO Film Project you can head over to the campaign on Kickstarter and make a pledge!

Seifert was kind enough to talk to us a bit about working on the film, and I thought you guys might enjoy our little Q&A!

What inspired you to make a film about GMOs?
I read a tiny article in New York Times online about peasant farmers in Haiti burning seeds in defiance of Monsanto’s gift of seeds to Haiti. I couldn’t believe that poor, hungry farmers were burning seeds, the very symbol and beginning of life. What was going on?
What is at stake for them that they would do something so bold and radical?  I had to go find out, and in doing so, I was awakened to the world of GMOs, both in our food and in our politics.

This isn’t your first food documentary. Can you tell me a bit about your first film?
In 2009, I completed my debut film, DIVE!, Living Off America’s Waste. Initially made with a $200 budget, a borrowed camera, and a lot of heart, time and dedication, DIVE! has since gone on to win at 21 film festivals worldwide and even screened at the U.S. Capitol in Washington D.C.

The current change.org petition, “Tell Trader Joe’s to Stop Wasting Food,” has been featured in many major online publications and has garnered the support of nearly 75,000 people and growing daily.

How did you get into documentary film making?
DIVE! was my first film, and I did it because I wanted to make films but didn’t know how and figured I better make something and see if I could even do it!

It looks like you did quite a few “man on the street” interviews for the GMO Film Project. Did you get any unexpected or surprising reactions from interviewees? I’d love to hear a couple!
We talked to so many amazing people all over Los Angeles, but no matter the age, class, or sub-culture, one thing connected them all: no one had a clue what a GMO is. Even when broken down to “genetically modified organism,” no one really knew what it was but said things like, “Oh, you mean like McDonalds and stuff? Yeah, I eat them, but I know I shouldn’t.”

This one man, sitting at a picnic table with his daughter, munching down their GMO lunch at the park, said to me after I had explained everything: “I really don’t know what it is that your talking about, and I guess that’s the whole point.”  Amazing.

If you’re interested in learning more about DIVE!, the other film he mentioned in our interview, you can check out the trailer right here: