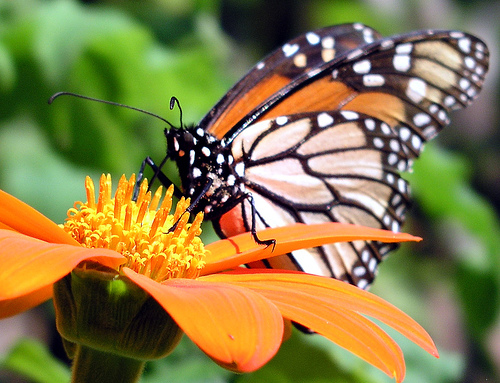 Recent studies have documented many negative impacts of glyphosate including malformations and birth defects in animals, cancer, genetic damage, endocrine disruption, and other serious effects, often at very low doses.

Taylor, Brower, and the paper’s other authors state, “We conclude that, because of the extensive use of glyphosate herbicide on crops that are genetically modified to resist the herbicide, milkweeds will disappear almost completely from croplands.”

Milkweed’s disappearance has also been documented by Robert Hartzler, an agronomist at Iowa State University, who found that the plant’s presence in Iowa’s corn and soybean fields has plunged 90% from 1999 to 2009. Hartzler also says that glyphosate has contributed to milkweed’s decline.

Taylor says more research will be published documenting glyphosate’s role in decimating monarch butterfly populations. “There are other papers in the works that will verify the decline and the association with the adoption of herbicide tolerant crops.”

Taylor, who heads Monarch Watch, a group dedicated to conserving monarchs, says that efforts should focus on preserving milkweed by encouraging individuals to introduce the plant into home gardens and reintroducing it wherever it has been eradicated.

Brower recommends that roadsides in the US be protected from pesticide spraying and that more conservation areas are set aside to maintain native plants.

Brower says most Americans aren’t aware of the devastation to biodiversity caused by GM crops.

“It’s atrocious what’s going on, and it’s very easy for the biotechnology companies like Monsanto to propagandize and mislead the public.”

The biotechnology industry responded by funding a series studies showing – not surprisingly – that Bt corn presented a negligible risk to monarchs. However, several scientists including Brower, Losey, and Iowa State University researcher, John Obrycki, wrote letters to the Environmental Protection Agency, citing weaknesses in the studies. Brower said that toxicology experiments were not done under natural field conditions. Losey and Obrycki said the studies were based on the assumption that monarchs consume only pollen and not other corn tissue, such as anthers, which contain high concentrations of Bt toxins.