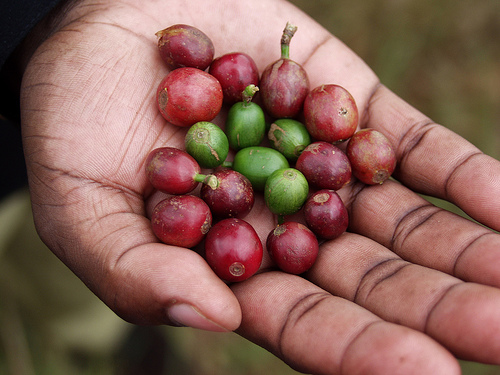 We’ve talked about responsible coffee consumption and toxins lurking in that cup of joe, but all that is moot if growers can’t produce the beans that make our favorite morning beverage.

Ethiopia and Latin America have traditionally grown the Arabica beans that are common in coffee. According to Yale Environment 360:

It requires just the right amount of rain and an average annual temperature between 64 degrees Fahrenheit and 70 degrees Fahrenheit to prosper. As temperatures rise — Ethiopia’s average low temperature has increased by about .66 degrees F every decade since 1951, according to the country’s National Meteorological Agency — and rains become more variable, Ethiopian coffee farmers have suffered increasingly poor yields. Last year was especially bad, with exports dropping by 33 percent.

Moving to higher elevations has helped, but that’s hardly a permanent solution. If temperatures continue to increase, we’re going to reach a point where that doesn’t work anymore. They can only go so high, right?

Coffee berry borer beetle. Say that three times fast! More troublesome than a tongue twister, the coffee berry borer beetle is a pest that’s become more and more widespread as temperatures have increased. It used to live only in Central America, but it’s now popping up in coffee-growing regions all over the world.

The beetle causes over $500 million in damages to coffee crops every year.

Juliana Jaramillo from Kenya’s International Center of Insect Physiology and Ecology has been studying the borer beetle and found that as temperatures rise, so does damage from these beetles:

This is worrisome news for coffee drinkers! I think Jaramillo’s quote from the Yale Environment 360 article gets it right: “I think the coffee industry has two options,” she said. “Either they start investing in climate research, or they educate the consumers to drink something else.”

What do you think?