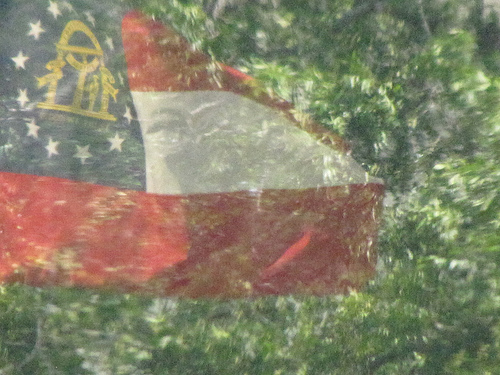 The Georgia farmworker crisis I wrote about last week has been getting a lot of attention. Aside from the fact that it is due to ridiculous Republican legislation, there are a number of interesting side stories that are quite interesting (and concerning).

I thought I’d do a little roundup of some of the most interesting ones for you this week as an update:

While it’s not very “Republican” these days to be immigrant-friendly (despite our country being built on immigrants from all over the world), it’s clear that Georgia’s anti-immigrant policies are hurting the state. One small-town Georgia mayor — a Republican, conservative, and Christian — has gone against the Republican wave as a result, joining the ACLU and the Southern Poverty Law Center in a “class-action lawsuit against the state of Georgia’s draconian new immigration law, House Bill 87.”

Approximately 8,000-14,000 protesters voiced their opposition to House Bill 87 and their support for more positive and productive immigration legislation at Georgia’s capital on Saturday.

While there is still a lot to address, and the results of this judge’s decision need to be clarified, the decision is a temporary, small win for those opposing the strong anti-immigrant legislation.

In a 45-page decision, Thrash temporarily put on hold the two most controversial parts of the law pending the outcome of a lawsuit challenging its constitutionality. Those two provisions were also scheduled to take effect Friday. One would authorize police to question certain suspects about their immigration status and arrest illegal immigrants and take them to jail. The other would punish people who – while committing another crime – knowingly harbor or transport illegal immigrants or encourage them to come here.

There are still a number of other portions of the legislation that have and will continue to drive immigrants out of Georgia if not address.

4. Getting Convicts to Work the Fields (reminder of how Georgia once got police to arrest people to do the same after Slavery was abolished)

Perhaps the most interesting story surrounding this farmworker crisis in Georgia is how the state has tried to solve it so far and how similar that is to similar historical situations and solutions.

Georgia had the idea to sign up convicted criminals to perform the farm work, well Republican Gov. Nathan Deal proposed this. Turns out, however, that it’s hard getting probationers to stay in the fields for even a day doing this work. The work is harsh and the pay is low.

Politics of the Plate had a nice piece making the connection a bit between this proposed solution and the way farmworker shortages were dealt with just after slavery.

When southern farmers faced a sudden shortage of fieldworkers after their slaves were freed following the Civil War, they made a request to local sheriffs: Go out and arrest some healthy-looking African Americans—vagrancy or any other trumped-up charge would do—and then lease them to us as farm laborers. Those convict-lease programs worked out well for the municipalities who collected fees for supplying the workers and for the landowners but not so well for the men who were forced to toil in the fields. That loathsome practice was banned by 1923.

But it looks like the state of Georgia is about to take a giant step backward by reintroducing felons to its fields….

That’s my summary on where this issue stands and more context around it. I’ll also add that Daniel Altschuler has an excellent, reflective piece on Georgia’s, other states’, and potential national anti-immigrant policies: Georgia’s HB 87 Goes into Effect on July 1.

Know any more about all of this. Have any stories to share?