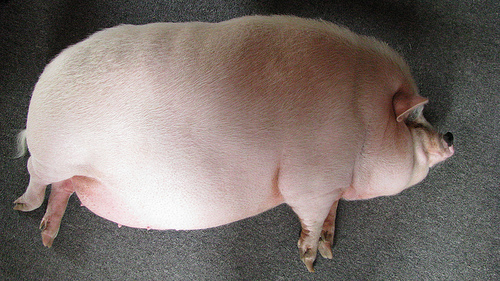 The outcry over FDA considering allowing genetically modified salmon for human consumption has almost overshadowed another GM animal that’s up for approval: the Enviropig.

Researchers at the University of Guleph in Canada have genetically engineered a pig that creates fewer pollutants in its waste by combining the pig’s genes with those from mouse and E. coli DNA. They first created the Enviropig in 1999 and applied for FDA approval 8 years later.

The FDA has been considering the Enviropig since 2007, and the researchers think it’s about halfway through the application process, though the FDA won’t confirm where they are in the approval process. It’s interesting that they seem to be taking their time approving the Enviropig when they’re rushing through approvals for GM salmon.

Pig manure is loaded with toxins like phosphorus, because pigs have trouble digesting the stuff. The Enviropig can digest dietary phosphorus around 50% more efficiently than your average piggy, which means less phosphorus in its waste. Phosphorus runoff is a major culprit in algal blooms, which injure and kill fish and other marine life.

Of course, with anything genetically modified there are health concerns. What are the long term effects of ingesting transgenic food? If raising pork is such an environmental issue, could we look at eating fewer pigs as a solution, rather than engineering a better one?

The other major issue, which we’ve seen with GM crops, is that they’re engineered to be sterile. This means that farmers can’t save seeds and must purchase expensive seeds year after year. That isn’t the case with the Enviropig, however. The genes get passed on from sow to piglet.

The Enviropig is already approved in Canada, and it’s looking like it’s going to be approved here in the US. What do you guys think? Would you eat genetically engineered pork?