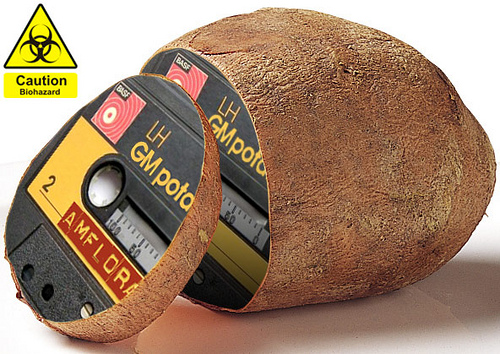 The EU recently approved cultivation of a genetically modified potato through controversial means.

Since I’m living in Europe now, I have been slightly comforted to know that genetically modified (GM) crops could not be grown here. I thought that at least one small continent could remain free of this very unnatural phenomenon. Of course, I was just slightly comforted because 1) the rest of my family and most of my friends still live in the US and 2) I am concerned with the effects GM crops will have, and are already having, on the whole world.

Unfortunately, the small comfort I had in the EU not allowing GM crops to be grown within its borders has diminished significantly in the past month or so.

The cultivation of a certain genetically modified potato, which some refer to as the ‘Frankentstein potato’, was approved by the European Commission on March 2, 2010. This is the first authorization of a GM crop in the EU in 12 years. The decision was made by a new group of European Commissioners and debate in the whole College of Commissioners was avoided via a so-called written procedure — the only way this could have been approved given the widespread opposition to GM crops within the EU.

Friends of the Earth’s Heike Moldenhauer says: “The commissioner whose job is to protect consumers has, in one of his first decisions, ignored public opinion and safety concerns to please the world’s biggest chemical company.”

This potato is not to be grown for human consumption but for other purposes (to start). Nonetheless, there are some European countries, like Italy and Austria, that are strongly against the introduction of these GM potatoes due to concerns of eventual health and environmental disaster.

Austria has said that it will outlaw the potato and Italy’s Agriculture Minister, Luca Zaia, plans to “defend and safeguard traditional agriculture and citizens’ health” from it.

In total, at least 12 countries have now moved to block the potato’s cultivation.

Discussing how this decision “flies in the face of science, public opinion and EU law,” Greenpeace states: “Medical experts are increasingly concerned about antibiotic resistance and an EU law was adopted in 2001 requiring that antibiotic resistance genes that could pose a threat to human health and the environment are phased out by the end of 2004.”

Those concerned worry that GM crops “could eventually reduce biodiversity and natural resistance to pests and disease, and that it is very hard to stop them cross-pollinating with non-GM crops.”

There is wide concern that GM crops like the Amflora potato (its company-given name) will create tougher and tougher bacteria and will likely interfere with the efficacy of numerous antibiotics, a problem EU’s pharmaceutical regulator sees rising for both human and veterinary medicine.

“The European Medical Authority (EMA), the agency that evaluates medicinal products in the continent, said Amflora contains a gene that produces an enzyme which generally confers resistance to several antibiotics, including kanamycin, neomycin, butirosin, and gentamicin”

There is particular concern for those with tuberculosis. “It could raise bacterial resistance to life-saving medicines, including drugs used for the treatment of tuberculosis,” says Greenpeace E.U. agriculture policy director Marco Contiero. “This is an unacceptable risk to human and animal health as well as to the environment.”