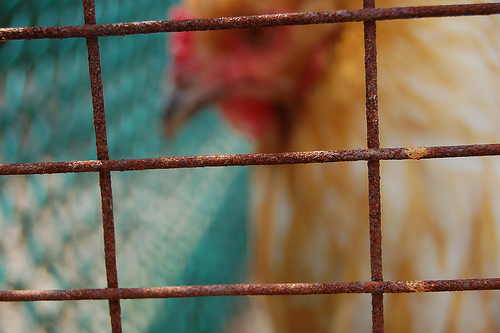 New research published last week in Science shows that chickens can be genetically modified to prevent the spread of bird flu.

Commercial adoption of this technique could help prevent outbreaks of bird flu within chicken flocks. Many viruses that infect humans, such as the H1N1 swine flu strain that killed 6,000 people in 2009, start in domestic birds before jumping to humans. Preventing virus transmission in chickens would reduce the chance of the virus affecting humans.

Although bird flu is uncommon in the U.S. right now, it is a significant problem in many parts of Asia and the Middle East.

This study is just the first step in developing a chicken that is resistant to avian flu. Several years worth of safety tests will be needed before genetically modified chickens and eggs end up at your local grocery store.

However, I wonder if development of such a chicken would even be necessary without large-scale poultry farms. Industrial chicken farms house up to 100,000 chickens confined in tiny cages or crowded indoor spaces. Under these conditions, diseases like bird flu spread rapidly. Eliminating factory farms might reduce the need for a genetically modified chicken.

What do you think? Is genetic modification of chickens a promising weapon against a threat to human health and global food security? Or does this new technology fail to address some of the root causes of emerging diseases?