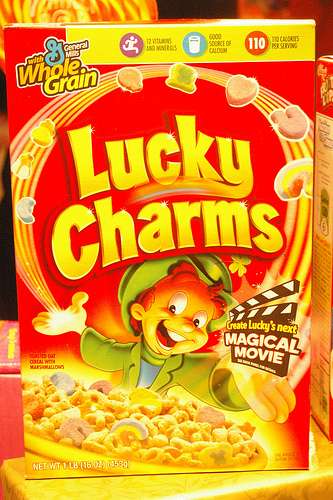 General Mills announced plans today to cut the sugar content in many of its cereals by as much as 25% in popular brands such as Lucky Charms, Trix, and Cocoa Puffs.  The move comes as food manufactures like General Mills face increased scrutiny from food regulators, and pressure from consumer and health groups over the nutritional content of their cereals, especially those marketed directly to children.

The company plans to reduce the sugar content of 10 of its popular cereals down to single digit grams per serving, though it did not specify a time frame for the action.  The move by General Mills comes on the heels of its competitors, Post Foods and Kellogg Co, reformulating some of its most popular kids cereals by reducing the sugar content and adding fiber and other vitamins.

This is definitely a step in the right direction from a large food manufacturer, though the lack of a time line and the fact that other General Mills childrens cereals like Franken Berry and Boo Berry aren’t included in the de-sugaring process, leaves room for improvement.  Jeff Harmening, president of the company’s Big G cereal division, though helped to put it into perspective. “This is a significant development across some of our biggest and longest-term brands.”

The move by General Mills comes after the recent suspension of the industry labeling “Smart Choices” program (see Los Angeles Times article), the nefarious system that led sugary junk food being misleadingly labeled as smart food choices.  You can read more about the Smart Choices Program.

Minneapolis, Minnesota based General Mills noted that the updated products will begin being released next year, though the timing will vary by product.