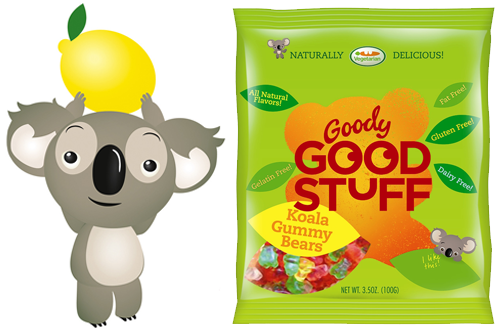 I know, it’s hard to imagine why gummy bears wouldn’t be vegetarian, but most gummy bears contain gelatin, which is an animal product. So, you can imagine my delight when the folks at Goody Good Stuff contacted me about trying out their gelatin-free gummies! Unfortunately, the Koala Gummy Bears weren’t vegan, since they contain beeswax, but the Sour Fruit Salad was totally vegan. The whole line of Goody Good Stuff is also gluten free!

So, how do you make gummy candy without gelatin? Most of the vegetarian gummy products I’ve seen use agar agar as the gelling agent, but Goody Good Stuff used something I’d never seen before: gellan.

According to the rep at Goody Good Stuff:

Gellan is derived from the underside of a lilly pad and gives the smooth, clear and gummy consistency of the sweets.

That sounds innocuous enough, but a PR person is hardly going to give you the full story about an ingredient, if there’s a problem with it. So, I did a little bit more digging and found a press release about Gellan Gum that said:

…Gellan Gum has been listed as an allowable ingredient for use in organic foods and beverages by the USDA National Organic Program (NOP) under the guidelines established by the National Organic Standards Board (NOSB).

Aha! If it’s allowable in organic foods, chances are, this gellan stuff is pretty good stuff. The release also says that “Approved products are non-GMO, Kosher and Halal certified and can be used in vegetarian applications.”

If you want to get a bit more scientific, Gellan is a water-soluble polysaccharide made by fermenting the microbe Sphingomonas elodea. The result is an off-white powder that some companies use in place of agar agar as a vegan/vegetarian gelling agent for things like gummy candies.

Speaking of gummy candies! Let’s get to the review!

The company sent me two types of candy to try: the Koala Gummy Bears and the Sour Fruit Salad. I noticed some corn ingredients on the label, and the company has assured me that they only source non-GMO ingredients. Yay!

What’s really cool about the Goody Good Stuff products, aside from the no-gelatin situation, is that they use all natural food colorings. This is great news, since chemical food colorings are linked to all sorts of nasty health problems, including ADHD in kids. Goody Good Stuff uses black currants, spinach and other plant-based dyes instead. Double yay!

These were a huge hit with my friends! I set out a bowl of the gummies at a card game, and people inhaled them so quickly that I had to run to the cabinet for more snacks. I even liked the green gummies, and I never like green gummy bears.

I think that the reason I liked the green ones is that Goody Good Stuff uses all natural flavors. The green Koala Gummy Bears didn’t taste like “green.” They tasted like the real kiwi that the company uses for flavoring them.

These gummy candies reminded me of the Sunkist candies I used to like as a kid. They weren’t very sour, which was sort of a bummer, but I definitely enjoyed them. Unlike the Koala Gummy Bears, these were coated in a layer of sugar, which gave them the gummy-yet-crunchy consistency that I remember from my childhood.

These were also naturally flavored, and some of the flavors were surprising! I think I liked the grapefruit ones the best.

I’m a big fan of fruit gums in general, and I’ll definitely be picking these up again next time I want to treat myself to gummy candy! There’s a complete list of where to buy Goody Good Stuff on their website. All manner of shops in the U.K. carry these gellan-based gummies, and U.S. shoppers can find them at a few brick and mortar stores and on Amazon.