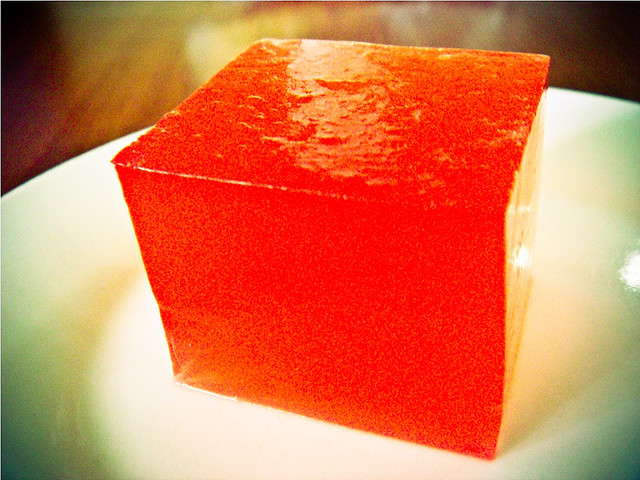 Wow, this is an interesting one. Some scientists are working on creating gelatin derived from human flesh and bones. Seriously — an article has been published in the Journal of Agricultural and Food Chemistry. My mind is a little blank trying to think of what to say about this. On the one hand, I have plenty of thoughts, but on the other hand, I’m in a little bit of shock.

I’ll start with some info from the press release regarding this study (published on Science Daily): “300,000 tons of animal-based gelatin [are] produced annually for gelatin-type desserts, marshmallows, candy and innumerable other products.”

Of course, this is a concern for vegans, strict vegetarians, and animal lovers around the world. Often, when I mention to someone what gelatin is (and why I don’t eat it), I get that “hmm, I don’t want to think about that” look. Seriously, who does?

To cut down on diseases spread via animal-based gelatin (including “Mad Cow” disease); gelatin variability and resulting manufacturing difficulties; and perhaps this concern for animal welfare, scientists have been looking into the possibility of “human-recombinant gelatin” (gelatin produced from human genes). The scientists in this study “developed and demonstrated a method where human gelatin genes are inserted into a strain of yeast, which can produce gelatin with controllable features,” Science Daily reports. “The researchers are still testing the human-yeast gelatin to see how well it compares to other gelatins in terms of its viscosity and other attributes.”

Can Human Gelatin be Vegan?

While, technically, human gelatin can’t be vegan in my eyes (humans are animals, too), human gelatin does seem like it would eliminate the main concern of vegans — animal cruelty and murder. Thus, it has gotten a number of greenies and foodies to bring up the question.

Where the scientists get the human genes, I’m not sure… but you must imagine they don’t come from abused or murdered humans.

Still, gelatin from humans? Could it pass with people? Lead author Jinchun Chen and his fellow researchers think that this option could be scaled to produce large amounts of gelatin for commercial use. But would people really be cool with this option?

Aside from the natural repulsiveness of the idea, this also makes me wonder (yet again) if we are going too far with our scientific manipulation, and what sort of unexpected consequences could result.

Want to read about another similarly shocking idea that involves food and scientific “innovation”? Check out Jeannie’s piece on the “Turd Burger” (video included) if you haven’t already.

Want to read more about gelatin (“normal” gelatin, that is)? Check out these two Eat Drink Better posts: