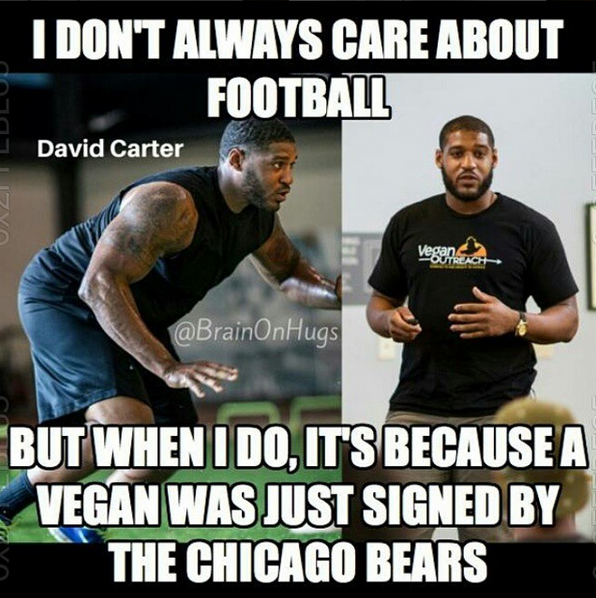 I have absolutely zero interest in professional sports, but my interest was piqued a few days ago when this photo below landed in my Facebook feed. Anyone that can make broccoli look that tasty has something good going for them! But after a quick read, I was pleasantly surprised to see my interest in football jump up a notch. Meet The 300 Pound Vegan, football star David Carter.

Carter has been in the news recently (at least, my type of news!) because he’s become an outspoken advocate of animal rights, compassionate living and a vegan diet. And with a physique like that, Carter puts a definitive end to the question of whether or not vegans get enough protein!

As explained in GQ, “In 2014, David Carter weighed 285 pounds and was working his way back up to 300. He had just signed with the Oakland Raiders, and was adding ice cream shakes and entire gallons of milk to his diet. But he was also in pain. His shoulder hurt, he was battling tendonitis, and three fingers on his hand were numb. He chalked it up to part of being a professional football player, specifically a bruising defensive lineman in the NFL.”

Fast forward a year, and Carter is now weighing in at about 300 pounds, but this time it’s because of a fully plant-based diet (and a lot of support from his vegan wife!). The pain has disappeared, and while he initially lost weight as a vegan, his has put it all back on (healthfully!). Not only is he back at fighting weight, he is, “running farther and faster, lifting heavier weight, and […] all the pain in his joints had disappeared. [He is] leaner and faster now than when he ate animals and their byproducts.”

Animal products like meat and dairy are linked to inflammation, which was likely the cause of his joint pain, and while animal foods can certainly help put on weight, animals protein is also directly linked to cancer. Not only did Carter do a good thing for his body now, he’s going to be fighting the good fight for years to come.

According to Bleacher Report, he eats about 10,000 calories a day to maintain his weight and continue to build his strength. His meal plan is pretty intense, but shows that it’s totally possible to be super muscular, fit, and totally plant-based (and so totally sexy, amiright?!) 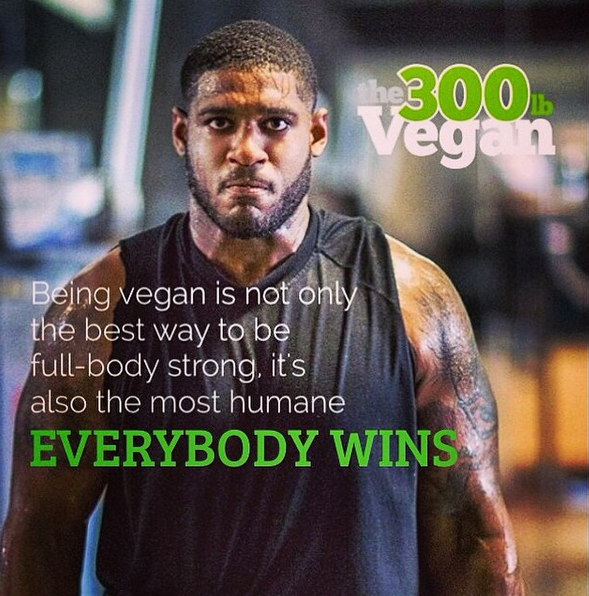 His meal plan is simple and clean, featuring a lot of beans, rice, grains, and added plant-based proteins like hemp and spirulina. Here’s an example of his daily meal plan:

Follow David Carter on Instagram @the300poundvegan to see more of his plant-based thoughts and learn more about this inspiring athlete!