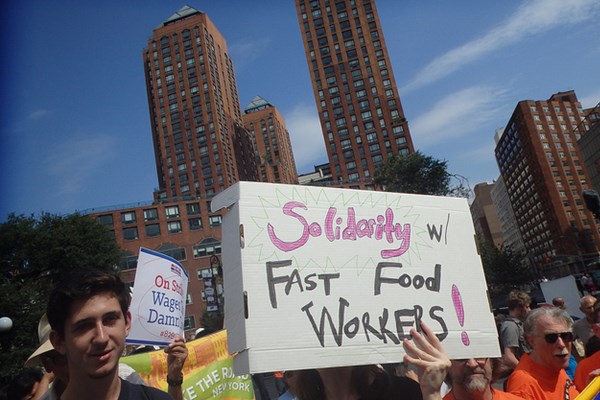 When we talk about the impact of fast food, often we mean its effect on public health or its role in the ongoing obesity crisis. But the fast food industry also boasts an awful record when it comes to worker treatment. Today hundreds of fast food workers across 80 cities on six continents staged a one-day strike, seeking a livable wage from their $200-billion-dollar fast food industry exploiters — er, I mean employers.

Hundreds of workers walked out of fast food jobs in New York City, Philadelphia, Boston, Raleigh, and other major cities around the U.S. to protest unlivable wages; similar protests were also organized today in Tokyo, Seoul and London.

The last 18 months have seen unprecedented organized actions seeking livable wages for food workers, but today’s strikes represent the largest and most cohesive effort to date. Fast food restaurants were obviously inconvenienced by the strikes, though McDonald’s and Burger King officials insisted to the press that no stores were closed due to the protests.

Naturally the corporate ‘people’ — whose profits have skyrocketed into the stratosphere under the current paradigm — would like to keep things just the way they are thankyouverymuch.

Like Walmart workers, full time fast food workers earning the current minimum wage disproportionately rely on SNAP (and other) government assistance programs. As one striking worker points out, ‘two-thirds of fast-food workers are women, and most of them also have children.‘

So whatever your opinion of fast food — if you hate it, believe me: you’re preaching to the choir here at EDB! — the issue of income inequality and worker exploitation within the food industry deserves laser-like attention from conscious eaters.

2. The Biggest Food Strike in History Is Happening Today

4. The fast food strike: the hard facts behind the Big Mac attack