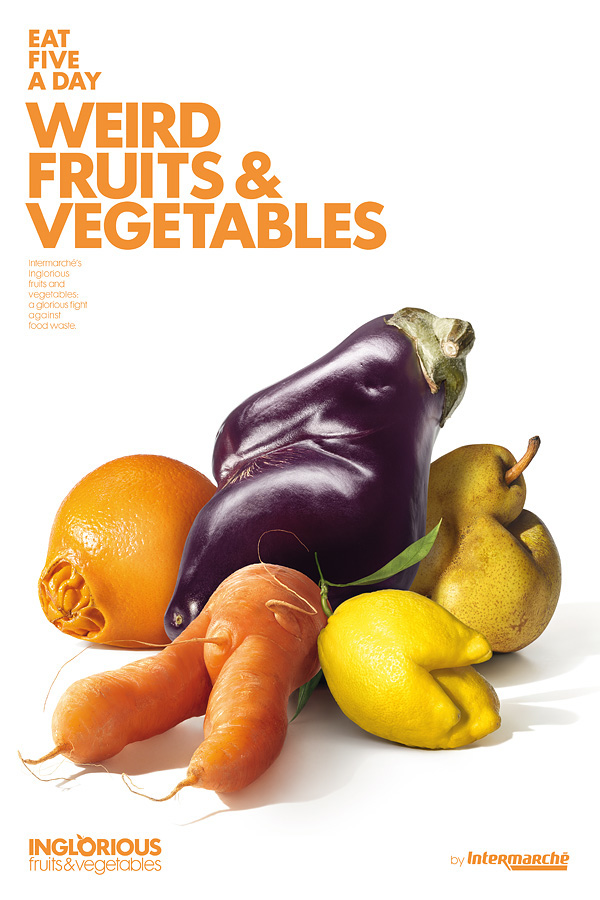 Don’t judge a carrot by its straightness or an apple by its roundness. Most “defective” produce ends up as food waste because it’s just not pretty enough.

Here are a few statistics about the tragic waste of misshapen fruits and vegetables:

About 30% of harvested produce in the U.S. doesn’t reach the supermarket due to trimming, quality selection, and failure to conform to superficial, cosmetic criteria. And approximately 40% of fruits and veggies in Britain never make it to grocery store shelves because they’re too ugly.

A recent New York Times article shares the story of a Portuguese farmer who says that one fourth of his 2,000 pounds of tomatoes has been unsellable every year because the fruits don’t meet the supermarket’s color, size, and texture standards. Another Portuguese grower estimates he’ll lose about half his spinach crop this year because weather fluctuations turned the leaves yellow. After all, everyone knows spinach is supposed to be green, right?

Meanwhile, 1 out of every 7 people globally go hungry every day. Ugly truths about ugly food indeed.

What Happens to the Rejects?

Produce is screened for its “beauty” between the farm and the food retailer. A new book by Tim Smyth, Defective Carrots, dissects this process for carrots, which are paraded through an optical scanner programmed to judge each vegetable for its cosmetic perfection. From the publisher’s web site:

Mechanically scanned, thousands of ‘optically deficient’ carrots are singled out each day and promptly removed from the conveyor belt. Some are grotesquely deformed and understandably rejected on behalf of the consumer. Others have morphed into humorous shapes referential of phallic abnormalities, human body parts and various imagined creatures. However, many other defective carrots have only the slightest irregularity, encouraging one to question the extent to which the retailer and the consumer is willing to privilege perceptions of ‘the norm’ over basic nourishment values.

Heaven forbid that a carrot is 1 degree less straight than we think it should be. Don’t expose me to that horror.

Fruit and veg that is deemed unacceptable doesn’t end up in your produce department even thought its completely edible and packs the same nutrition as prettier produce. It commonly makes its way into juices, animal feed, or anaerobic digesters at significantly reduced profits for farmers. Or it’s simply plowed back into the ground — wasted. Oh — did I mention 1 out of every 7 people globally go hungry every day?

With the growing understanding of how much food we waste while many go hungry has come action. Doug Rauch, former president of Trader Joe’s, plans to open a market in Dorchester, Massachusetts to divert ugly and expired food from ending up in dumpsters, rerouting it to an underserved population that has a tough time finding healthy food to eat. The market will sell fruits, vegetables, and prepared foods at deep discounts, providing lower-income families a healthier alternative to fast food.

This is just one of the many positive stories I’m finding in my research. Tune in tomorrow — I’ll share more good news about ugly food’s rise in popularity.

How did we get to be so superficial about our produce? What do you think of these dismal facts? Would you buy ugly food?