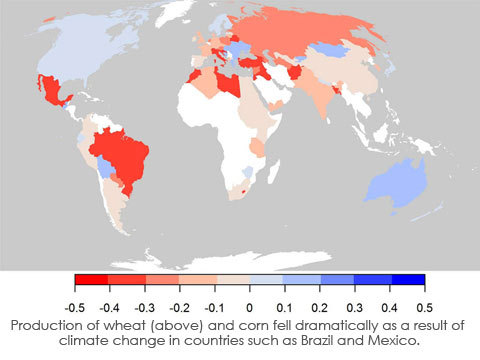 Now, this didn’t hit me until recently, but if you don’t follow climate science closely (or much at all), you may have a hard time making the connection between climate change (or global weirding) and food security or food prices. I mentioned rather matter-of-factly to someone recently that some of the unrest in the Middle East was related to climate change and the effect it’s having on food security there, and that person acted like I was a little crazy. This shocked me, but it made me realize that a lot of people don’t see the connection.

Now, a new study published in the journal Science at the end of last week confirms the relationship between climate change and food prices/food security. And, really, making the logical connection between lack of food security and citizen unrest is pretty easy. If people, on a large scale, are having their ability to eat threatened, it’s no surprise that they are going to eventually get a little antsy and rise up.

Here, we show that in the cropping regions and growing seasons of most countries, with the important exception of the United States, temperature trends for 1980–2008 exceeded one standard deviation of historic year-to-year variability. Models that link yields of the four largest commodity crops to weather indicate that global maize and wheat production declined by 3.8% and 5.5%, respectively, compared to a counterfactual without climate trends…. Climate trends were large enough in some countries to offset a significant portion of the increases in average yields that arose from technology, CO2 fertilization, and other factors.

Bottom line: global warming is already here (something we’ve known for awhile) and it is reducing the amount of food that be grown. This, of course, is a matter of great concern for food security… NOW in many places.

And while the U.S. hasn’t been affected as badly yet, I think there is no doubt it will be. Even now, as I’m writing this, important regions of the Midwest, the “breadbasket” of the nation, are getting hit with severe storms and flooding that will surely affect crop yields and food prices. This, like any specific extreme weather event, cannot be conclusively linked to global warming (scientifically), but it is exactly what climatologists have been projecting and warning us about for years.

“Without successful adaptation, and given the persistent rise in demand for maize and wheat, the sizable yield setback from climate change is likely incurring large economic and health costs,” the report states.

This is an issue, unfortunately, I’m going to have to come back to more than once. For now, though, I’ll leave you with this excellent video on the matter from one of the best climate denial de-crockers on the internet: