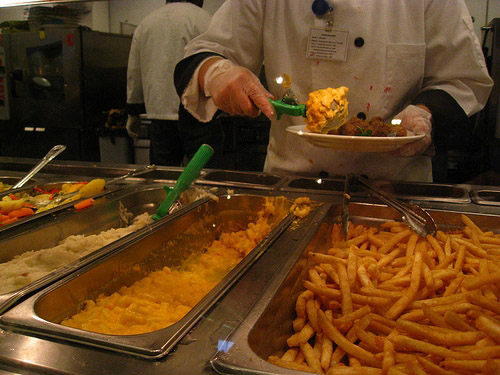 At the risk of sounding repetitive, I’d like to add to the growing list of the benefits for healthy school lunches and school lunch reform that we blogged about yesterday. On Tuesday, USA TODAY ran an investigative story about tainted school lunches that shows how safety lapses in food production or distribution can put children at risk.

The lead of the piece is a story of almost 70 students at a Wisconsin elementary school who got sick two years ago after eating tainted tortillas. A subsequent investigation discovered that flour tortillas from the providing company were responsible for outbreaks at “more than a dozen schools in two other states” over five years. The FDA issued a warning about the tortillas, but the article says the warning never made it to school officials.

However, this case isn’t an isolated incident. According to the article,

The story of how food with a history of making kids sick continued to get into schools illustrates broad failures in government programs meant to provide safe, quality meals for America’s children, a USA TODAY investigation found. Parents and schools often have no idea where the food comes from. They know even less about the safety records of the companies that supply it. And if they try to find out, they face government roadblocks that put the rights of manufacturers ahead of providing information that could protect children.

It goes on to explain how food-borne illnesses often don’t get reported, authorities struggle to find the cause of the outbreak, or action on the issue comes to late — all factors that can potentially create safety risks.

The even more frustrating part is that even if schools did have an idea about what foods to avoid, there’s almost no way for school officials to figure out where the food that’s feeding their students is coming from. The investigation discovered that because of the way schools get their food — through distributors or as part of the National School Lunch Program — it’s difficult to track any of it back:

Schools have virtually no hope of figuring out where all of the food on a child’s lunch tray originates. That’s because the food often is handled by many processors and distributors. “There’s no way I could possibly keep track,” says Katie Wilson, director of the meals program for the Onalaska, Wis., public schools and the former president of the School Nutrition Association, a group of officials who oversee lunch programs.

Again, the article goes into much more detail on this point, highlighting many of the places where food can get tainted along the long and twisting path from producer to the Styrofoam tray in a school lunchroom. It’s an excellent read — please do check it out.

I’ve been interested in the idea of school lunch reform since I heard author Michael Pollan suggest reforming school lunches to include more locally grown foods. I’ve been thinking about his suggestion in terms of the impact on a local economy and local farmers. The USA TODAY investigation made me think about the issue in terms of food safety, something I hadn’t considered before.

If foods in school lunches came from local producers, growers, and processors, schools would be able to more easily trace food back if there was a problem. And eliminating the storage and transportation steps in the middle could cut down on the possibility for contaminants to get into food or for food to be stored improperly.

There are some people working on this issue. According to The National Farm to School Network, 42 states have operational farm to school programs which reach about 8,943 schools. I have to admit I don’t know the details about those programs or what other programs there are, but this investigation provides at least one other good example of why it should get looked at further.

Image credit: SpecialKRB on Flickr under a Creative Commons license