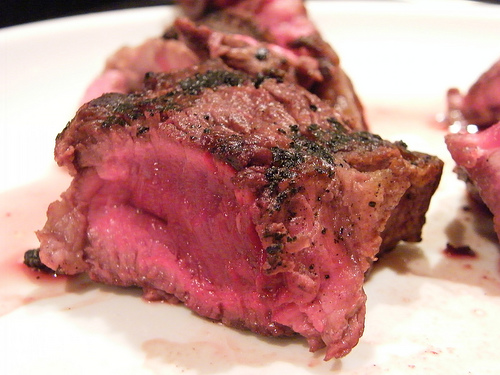 At least 19 people in 16 states have gotten sick from E. coli-contaminated beef, and the company that produced these steaks is issuing a recall.

[social_buttons]The recalled beef is the sort that’s been mechanically tenderized by piercing it with needles. This type of meat is referred to as “non-intact.” As Marion Nestle explains it:

The great thing about intact steak is that harmful contaminants are on the outside surface; the bacteria get killed by the high heat of searing the outside surface. You don’t have to worry about the safety of intact steak because its insides are relatively sterile. But if the steak is pre-treated to tenderize it, watch out! Tenderizing can drive harmful bacteria right into the interior where they won’t get killed unless the steak is thoroughly cooked.

This is despite the USDA receiving >several warnings that mechanically tenderized steak was a high risk food. Thanks to pressure from the meat industry, though, non-intact beef is not tested and doesn’t require any special labeling.

The USDA Food Safety and Inspection Service has more information about the 248,000 pounds of recalled beef, which includes 21 different varieties from Oklahoma company National Steak and Poultry.