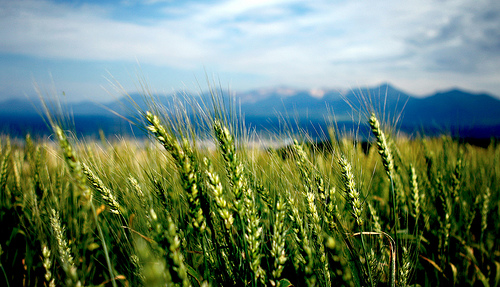 We’ve talked a lot about genetically modified crops here at Eat. Drink. Better — the ongoing battle in the EU over Monsanto’s MON-810 maize, Obama’s refusal to halt genetic engineering in the US sugar-beet industry, and the politics behind it all.

But one frankenfood we haven’t discussed is wheat. Why? Well, mainly because it doesn’t exist.  There simply aren’t any commercially-available strains of genetically modified wheat available.

The United States, Canada, and Australia want to change that.  In an unprecedented joint statement released yesterday, top wheat organizations from the three countries announced that they intend to “work toward the goal of synchronized commercialization of biotech traits in our wheat crops…we believe it is in all of our best interests to introduce biotech wheat varieties in a coordinated fashion.”

This announcement comes at the same time as the USDA’s prediction that US wheat production will be down by 20% in the current 2009/2010 growing season.  Globally, the world wheat harvest is set to be 4% lower than last year.

In the joint statement — available in its entirety here — the wheat industry organizations say,

“In general, wheat yields are on a very slow growth trend in comparison with competing crops, and the longer it takes to increase the growth rate the bigger will be the hole from which the industry must climb.”

But what the statement fails to explain is this: last year’s global wheat yield was the most massive on record, and despite the 4% drop, the current growing year is still set to be the second-largest ever.  Can we really call that a “hole”? Even when we shift the focus away from world-wide numbers and down to just the countries at hand, the claim of a “hole” still doesn’t hold up. Canadian wheat production estimates a nearly 4% rise in output, while Australian wheat production is expected to drop just shy of 1%.

Still, industry leaders argue that wheat does not have a chance of keeping up with other grain crops unless a genetically-engineered strain of wheat is developed. The statement continues,

“Wheat production is under pressure from competing crops which, through the application of biotechnology, have achieved higher productivity, reduced input use, and other benefits not available in wheat.  As a result, the historic area of wheat production has declined in many areas and economics are driving producers away from wheat and into other crops if they have alternatives…we believe that by developing higher yielding better quality wheat varieties we can better supply the world with wheat food products.”

Despite such facts, the United States, Canadian, and Australian wheat industry leaders argue in their statement that not only will biotechnology increase yield, it will produce higher quality food for the global population.

“One important tool to help feed the world into the future is biotechnology.  Basic agronomic
improvements to wheat like strengthening disease and insect resistance, enhancing wheat’s use of soil nutrients and water, increasing its tolerance to weather extremes like drought and frost, are all possible with biotechnology.  Another critical area for biotechnology is to improve the nutritional aspects of wheat to facilitate healthier living for people all over the world.”

“There is no evidence that GM crops have made any specific contribution. GM crops have not performed better than existing conventional crops (e.g. they have not increased yields…) so it cannot be claimed that poor farmers and communities have received sustained indirect benefits, such as increased incomes.

Furthermore, the reliance of the GM industry on patents for their crops means seeds are expensive and farmers are unable to save seed for the following year. This means GM crops are inherently unsuitable for poor, small-scale farmers. …Rather than contributing…it is more likely that the corporate-led, industrial farming model promoted by GM crops is in fact undermining.”

In the face of these facts, the three nations maintain that “biotechnology is a proven technique” and are determined to commercialize the wheat industry. There is not yet any word on how or when the countries plan to begin the biotech research.

Image via Jaako on Flickr under a Creative Commons license.